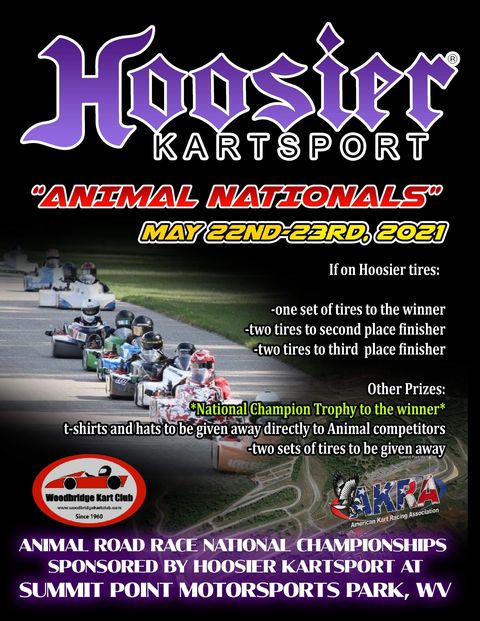 The race is for Briggs sprint-enduro karts (the road-race style sprint karts with full fiberglass bodywork and a laid-back seat) and it follows AKRA’s 4-Cycle Sprint 380 class rules, which allows the methanol-powered Briggs Animal, the Pro Gas Animal and an LO206, all at different weight breaks. We’d assume nearly every entrant will be running the faster methanol Animal.

The Animal Nationals includes both Saturday and Sunday’s 4-Cycle Sprint 380 Final 1 and Final 2 with motocross-style points of adding each racer’s two finishing positions together, low score winning. Any ties will be broken by fastest lap time in F2.
We’ve been seeing a lot of buzz about this race on social media over the last couple months.

Promoters Josh Nevels, Jonathan Tedder and 4-Cycle Central have done a great job spreading the word and it appears about 50 Briggs sprint-enduros will take the grid come May 22 and 23. With the popularity of CIK LO206 divisions growing so much in recent years, we never would have predicted a field of this many sprint-enduros — 4-cycle or 2-cycle — to ever race in the same class at the same race again. What a sight it will be when some four dozen Briggs sprint-enduros come roaring out of Turn 10 onto Summit’s 2,980’ front-stretch.

“You could finish last and potentially win $1,000,” Nevels said.

Over the last couple months we’ve seen sprint-enduro karts all over the country are getting bought and sold, refurbished and simply dusted off for this big event. Drivers who have never run the class are planning to enter. And there are still several good karts out there available for sale. We’d imagine plenty of 4-cycle kart engine builders are seeing an uptick in business from racers and teams preparing for the event.

And while Summit has been a popular destination for road racers for decades, many of the Midwesterners that will join the 2021 Animal Nationals field have never seen the track. With no Friday practice offered, it will be interesting to see how the quick the invaders can adapt to the fast 10-turn course against the WKC regulars and other East Coast racers who’ve run at Summit Point numerous times. Normally there are only two rounds of practice Saturday before racing begins around 11am.

As we get closer to the Animal Nationals we’ll post another preview looking at the pre-entry list and trying to identify some potential favorites.

The event will run as part of the regular schedule, with racers entering 4-Cycle Sprint 380 F1 on Saturday and F2 on Sunday. There will be no additional entry fees required. Gridding for F1 will be by the usual road-race practice of entry times, with F2 gridded by the results of F1. Final results will be calculated at the end of Sunday’s post-race tech, following the motocross procedure of adding each racer’s two finishing positions together, low score winning. Any ties will be broken by fastest lap time in F2.

The event will be run under AKRA rules. Post tech will be by Tom Speaks, AKRA Tech Inspector, assisted by WKC Tech Inspector Scott Sanders.

“We look forward to hosting Animal racers from all over the Eastern United States” said Brandon Taylor, WKC Race Director. “We are working on the schedule to put the Animal Nationals on track in its own race group, so they have the best opportunity to showcase their driving skills. In addition, we will schedule the Sunday F2 race early in the day to get our many Midwest racers safely on their way home.”

“I love this sport and I want to do something special to give back to my many racing friends and the Woodbridge Kart Club, “stated Jonathan Tedder, long-time 4-cycle competitor and WKC Board member. “There has been a lot of interest in this event from racers we haven’t seen in years. We should have an outstanding field and I am really looking forward to some great, close racing.”