The annual karting extravaganza, which began in the mid 1970s (1974, we believe) as a standalone enduro race on DIS’s super-speedway road course, has seen many format changes over the years including dirt races at nearby Daytona (then Municipal) Stadium and sprint races about 90 miles up the road at 103rd Street Sports Complex in Jacksonville.

The current Daytona KartWeek format of all three races at the same venue has been running since about 2010 — the sprint race (formerly the WKA Manufacturers Cup Series) on the infield kart track, the Dirt World Championships at the quarter-mile limestone-based DIS Flat Track and WKA’s Vega Tire National Road Race Series continuing on the 3.56-mile road course.

WKA KartWeek continues as an important event for the karting industry and it produces a different, unique vibe over most. The spectacle of DIS’s massive infrastructure in the background while kart racers compete for three straight days at three different tracks is something every motorsports enthusiast should experience at least once.

In all, we figure WKA processed nearly 3,000 race entries between the three shows. While we don’t have an official count from Dirt or Road Race, WKA officials said around 1,700 race entries were counted among the three days at the DIS Flat Track. That’d be approximately 500 shy of the all-time record of 2,200-plus set back in 2003 at Municipal Stadium.

And we counted 592 race entries at the Sprint Championships between Thursday and Friday’s racing.

By those estimates, the overall KartWeek race (class) entry count was somewhere between 2,800 and 3,000. We figure that’d be roughly 700 to 800 individuals competing in go-karts at DIS for this latest edition of Daytona KartWeek.

And the weather couldn’t have been better with mostly clear skies and comfortable temperatures throughout most of the four-day event including parking day on Dec. 27.

Jedrzejek dominated day one’s Yamaha Senior enduro final. The Ohio driver, who’s become one of the top enduro racers in the country the last several seasons, won the race by a big margin over Jason Lorang and Patrick Olsen.

The second biggest headline probably was a wild fire Thursday afternoon near the DIS infield’s International Horseshoe corner. A kart made contact with guardrail and slid under the padded barriers. The barriers and kart set ablaze after the driver had exited the machine with at least 20-foot high flames and heavy smoke bursting into the air for around 10 minutes. Luckily, no one was injured but the event was halted for at least an hour as officials worked to clean up the accident scene.

In other on-track action at Road Race, the Roll Speed Performance team had another impressive week. Team co-owner Scott Heath of Virginia opened Thursday’s action with a win on his No. 192 RSP Skull Dragger chassis in CIK LO206 Final 1 by inches over teammates Jon Miller and Doug Kittelson. Between 40 and 50 LO206s took the green flag in the division.

Hunter Macomber was a winner in IAME Sprint on day one over Keith Scharf and Indy Kassy. Kassy would return Friday to win the second IAME final by a 0.042-second gap over Joseph Gaulin to capture his first Daytona triumph.

In the same race Thursday, a rare dead heat ended the Animal Sprint 390 main between Terry Borcheller and Hank Hefner. Officials would give the win to Borcheller because he started further back on the grid, thus he covered the greatest distance in the allotted time per WKA rules. Zach Linsell was a close third on his MGM Mirage chassis.

Plenty of other road racers took home P1 hardware from Daytona and we apologize for not mentioning every class winner.

On day 2, Miles again gapped the KA Senior field by a convincing margin and went purple in the process with a quick lap of 41.996. Bayliff finished P2 on this day with Olivier Piatek P3, Julian DaCosta P4 and Garrett Davis rounding out the top five.

Miles picked up the $2,500 top prize for his overall KA Senior win.

Florida’s Colin Warren continued to make his case as the top senior 206 driver in the country. The TS Racing / VLR chassis pilot won three of the four senior 206 mains and did so in convincing fashion.

In Thursday’s 206 Senior 360# main Warren would drive to the win by a 2.391-second gap over PPK / Coyote Racing Chassis driver James Overbeck. Hunter Fox was a solid P3 on his Margay with Christopher McKeithan P4 on a Coyote and Gabe Sessler P5 on an AEM Karting EOS.

Sessler broke Warren’s domination late Thursday when he won a shortened 6-lap Senior 380# final over Warren. Sessler, from Washington state, jumped out to an early lead after Warren got shuffled back and took advantage of the short race to win by about 10 kart-lengths over Warren. Moe Edmonson had his best run of KartWeek with a P3 result on his MGM Espionage. The win marked Sessler’s second at Daytona in two years.

Day 2’s senior 206 competition was all Warren. He started the day with another Senior 360# triumph over Overbeck, this time by a 3.3-second margin. Gabe Sessler was third, Adam Maxwell fourth and Gabe’s younger brother, Jake Sessler, was P5 of 34 starters.

Warren would close out his KartWeek with a win in Senior 380# by a 4.1-second gap over Gabe Sessler with Maxwell P3. Warren’s wins were good enough for a cool $2,000 payday from WKA and a scholarship to the Skip Barber Racing School.

Like Miles in KA Senior, multi-time Canadian champion Jensen Burnett flexed his muscle in KA Junior with convincing wins each day. On day 1, Burnett pulled out to a 4.3-second advantage in a shortened 8-lap final to score his first win of KartWeek 2022 over Cameron Brinkman. Florida’s Chris Aitken had a solid drive for P3 with Austin Olds P4 and Sarah Bradley P5 of 28 starters.

Friday’s KA Junior final was closer but the same result at the top of the leader board with Burnett scoring his second win of the week. This time Burnett triumphed by a half-second gap over Eli Warren, who went purple in the race with a 42.094. Olds improved a spot from this Thursday run with a P3 effort as did Bradley, who finished P4. Brinkman rounded out the top five.

Giglio drove his Mike Giessen-tuned machines to day 1 wins in 206 Cadet and Micro Swift. In 206, Giglio won by a half-second margin over William Roberts. Emerson Lane was P3 with Daniel Draganov P4 and Danny O’Gara P5. Giglio would close out the day with his second KartWeek triumph by nearly a 2-second margin over Colton Schniegenberg in Micro. Holden Myers was third, Lane fourth and Kade Kasper fifth of 25.

Kemper matched Giglio with a pair of wins both coming on day 1. He’d start the day with a 1.296-second victory over Carter Barkis in 206 Cadet Advanced. Christopher Youtsey was third, Jacob Schaible fourth and Henry Taylor fifth of 16 starters.

Kemper picked up win No. 2 late Thursday as darkness had nearly fallen on the Daytona Beach area. In a quick 6-lapper due to limited daylight, Kemper won Mini Swift by a tight 0.111-second margin over brothers Drew and Devin Walz. Race Beckman was P4 and Schaible P5 of 23.

Jorge Ruiz was top 206 Masters racer of KartWeek 2022. The Georgia racer wheeled his MGM chassis to wins both days in the 35-and-up age category.

On Thursday Ruiz crossed the finish stripe 0.538 seconds ahead of Phil Pignataro for his first win of the week. Kevin May was a close P3.

Ruiz again kept Pignataro at bay in Friday’s Masters final to sweep the class’s main events. The JaM Racing pilot crossed the stripe 0.210 seconds in front of Pignataro for the score with May again a close third. North Carolina’s Nitro Dick Timmons was fourth and Jason Froemming was P5.

Jared Clarke and Eli Warren split the 206 Junior finals. Clarke won one of the best races of the Sprint Championships on day 1, fending off Sawyer Roussel to the finish by just 0.163 seconds. Roussel made a bid for the win in the final corner but he wasn’t able to overtake Clarke’s No. 216 MGM / Nitro lefty machine. Wisconsin’s Ava Hanssen was P3 with Josey Chambers P4 and North Florida Kart Club champion Ronnie Klys P5 of 28 starters. Louisiana’s Derek Wargo was P6 and went purple with a 47.334.

Warren, who had trouble on day 1, returned Friday to dominate 206 Junior action on his Redspeed chassis. The Kentucky racer won both the prefinal and final to add his name to the junior winner list at KartWeek 2022. Warren would win the final by a 0.865-second gap over Hanssen, who was the only drive to finish the 206 Junior finals in the top five both days. Carter McMurray was third on his Compkart with Caleb Tarter fourth and Wargo rounding out the top five.

Hanssen’s consistent top-three finishes netted her the overall win and the Skip Barber Racing School scholarship that went with it.

Sawyer Chambers, Kade Kasper, AJ Stoner and Devin Walz all added their names to the win list at Daytona Sprint.

Chambers scored the 206 Cadet Advanced final on day 2 with a 0.192-second triumph over Carter Barkis, who settled for a close P2 both days. Henry Taylor was third, Hudson Urlin fourth and Schaible fifth.

Kasper drove his Trackside Karting Services No. 55 to a win in day 2’s Micro Swift main and denied Giglio of a class sweep in the process. Schneigenberg netted another podium with a P2 results, 1.126 seconds back of Kasper. Danny O’Gara was P3, Holden Myers P4 and Stoner P5. Giglio settled for P7 behind Nolan Goulart in P6.

Stoner wheeled his No. 420 A-Maxx Racing Tony Kart to a win over Giglio in the 206 Cadet day 2 final. Stoner scored the win by a comfortable 3-second advantage over the Georgia racer and like Kasper in Micro Swift, denied Giglio of a class sweep. Tanner Barsch was third, William Roberts fourth and Daniel Draganov fifth.

Devin Walz won the final race of Daytona KartWeek 2022 with a score over his brother, Drew, in the 10-lap Mini Swift main. Devin crossed the stripe just over 0.7 seconds in front of Drew for his first win at Daytona. Henry Taylor picked up another P3 result and Schaible added to his list of top-five finishes with a P4 effort. Chambers rounded out the top five. 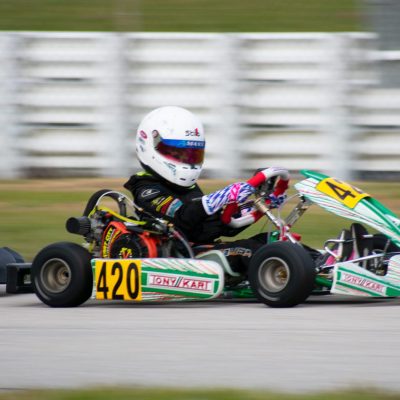 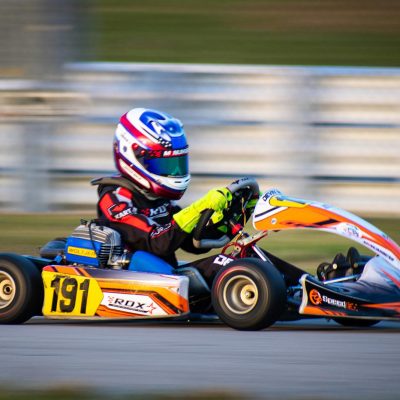 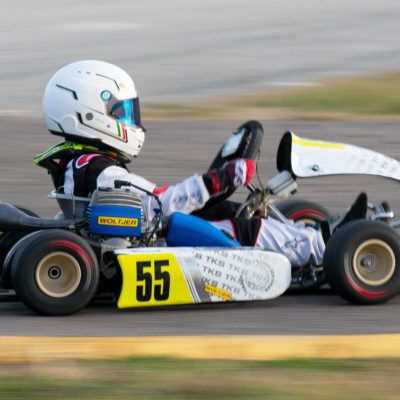 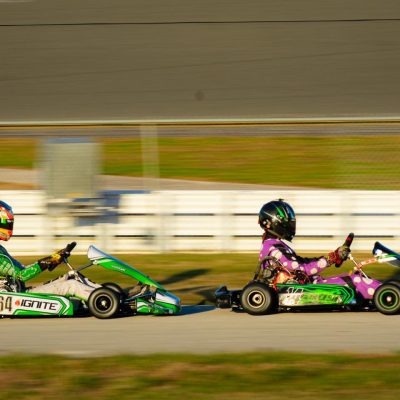 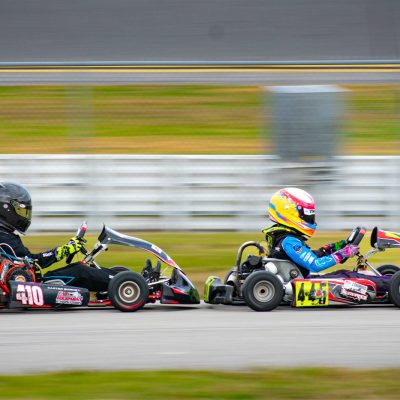 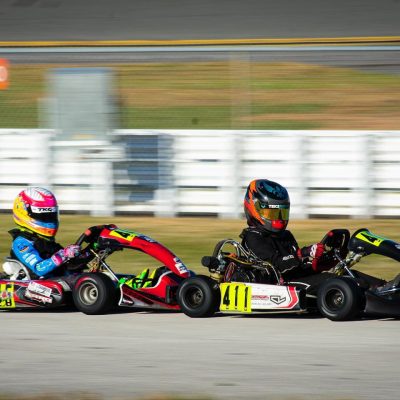 On Friday it was Stamer’s turn for an Ignite Senior win and like Frost, he did it by barely beating out Gavin Bayliff. Stamer’s Margay would cross the stripe 0.014 seconds in front of Bayliff for the closest margin of victory at the 2022 WKA Sprint Championships. Wisconsin’s Nick Ksobiech had his best run of the week with a P3 result just ahead of Jordan Taylor and Florida’s Jed Perkins.

Michael Burton and Tim Hannen split the Ignite Masters finals. Burton won on day 1 by 0.418 seconds over veteran Jeff Jewell with Hannen third. Hannen returned to cap off his KartWeek with a win by nearly a second gap over Burton; Jewell was third.

There were a handful of on-track and off-track injuries during the Sprint race and we sincerely hope everyone is OK and is able to make full recoveries.

Next up for WKA sprint racing is round one of the Gold Cup Series’s South Region February 17-19 at 103rd Street Sports Complex in Jacksonville, Fla.

Many thanks to WKA for allowing Kart Lounge to cover Daytona KartWeek 2022.