JACKSONVILLE, Fla. — The Maxxis 4-Cycle Sprint Series held their fourth annual season-ending Grand Nationals this past weekend at 103rd Street Sports Complex in Jacksonville, and in all likelihood it will be the last. Series director Buddy Long confirmed at Friday night’s 2021 awards ceremony that the series will not return in 2022, and again shared the news at Saturday morning’s drivers meeting.

While rumors had been circulating about Maxxis ending their sprint series for at least a month, the news still came a sad blow for many. While kart counts were average during the program’s four-year run, the series had gained a loyal following with dozens of families and teams rarely missing an event. This year, most classes averaged between eight and 12 entries at the six race weekends, and the racing was very competitive, but apparently it wasn’t enough for the Maxxis brass to move forward with the program for a fifth year.

As emotion was evident from both officials and families throughout the weekend, there was still big event to get through with Grand National eagle trophies on the line in addition to other awards.

Saturday night, a pair of intense money races ran just before dusk after a long day of qualifying and two rounds of heats. Click here to read about Saturday night’s money racing, which included some drama in the tech barn.

Sunday’s schedule consisted of one quick round of practice and nine finals for LO206 divisions. Here’s a recap of the nine 206 divisions and three Vintage classes that ran their heat race and final Saturday.

Maxxis added a Legends class for the first time for drivers age 50 and up, and it attracted seven entrants. The race for the win came down to four racers with Todd Horton, Jesse Samples Jr., Phil Pignataro and Tim Clark separating themselves from the rest of the field.

Samples and Horton traded the lead a couple times with Pignataro and Clark riding P3 and P4. Horton held the lead on the final lap while Samples and Clark battled side by side for second. This gave Horton some breathing room as Samples passed Clark for P2 and Pignataro following him through for P3. Horton would cross the finish line a kart length ahead of Samples for what appeared to be the win. However, neither Horton nor Samples would make it through longtime tech man Randall Lyles’ post-race inspection, handing the win over to Pignataro, who was making his first appearance at a Maxxis race. Clark would move up to second, Randy Reep third, Scott Wentz fourth and Steve Loftin rounded out the top five after the disqualifications.

Seven kid karts made the call, which was about the average all season at most Maxxis sprint races. The class was a good one for the youngsters throughout the year with several different winners, and on this weekend it was Georgia’s Barrett Turley scoring the victory.

Turley pulled out ahead early in the 10-lap contest and was never seriously challenged throughout the race. Logan Hall ran well in second but couldn’t catch Turley, who crossed the stripe over 3 seconds ahead of Hall. The race for P2 was a good one with Hall barely holding off Parker Stewart for the runner-up spot. Stewart won the Roberts Kart Shop pole award but would settle for P3 in the final. Canon Love was fourth and Ryder Thompson rounded out the top five. Alex Nunally and Blaise Hindrey completed the seven-kart field.

In one of the most dominating performances of the season, Sawyer Chambers went perfect on the weekend in the pair of Cadet divisions, winning both pole awards and four heat races Saturday, and returning Sunday to win handily in both main events.

Chambers opened the day with a morning victory in the nine-kart Cadet Green final. The youngster opened up a 9.460-second lead over Jaydyn Fowler by the finish. Ryan Hall, who was competing in his first Cadet race ever after moving up from Kid Kart, ran a solid third. Camden Harp and Will Haire completed the top five of nine starters.

Lanie Thigpen, Sydney Miller and Caden Everhart finished P6 through P8. Justin Sherbert ran second to Chambers in both of Saturday’s heats but ran into problems in the final, completing only 11 of 15 laps.

Florida’s Elmer “Moe” Edmonson was the driver to beat in Senior Heavy. After sweeping the senior finals at the series opener at 103rd Street in April, Edmonson was fast again at the Grand Nationals.

Edmonson, Moore and Collin Miller pulled away from the field in Sunday’s 15-lap final. With the help from teammate Miller, Edmonson led the entire way, fending off challenges from both Miller and Moore on the final lap to score his third Maxxis feature win of the year at Jacksonville. Miller would finish 0.242 seconds back in P2 with Moore just behind in P3. Michael Clark was P4 and Aren Lloyd completed the top five of 11 starters.

The Senior Medium division had everyone at the fence throughout the weekend with a few of the top LO206 drivers in the country in attendance.

Corey Towles swept Saturday’s competition with the pole award and triumphs in both heats. But Towles’ disqualification in Saturday night’s Senior Heavy money race meant he’d have to start at the rear in Sunday’s final. In another twist, Edmonson would also start at the rear after making an engine change.

While 15 karts competed in Saturday’s contests, both Towles and Edmonson would benefit when only 12 took the grid for Sunday’s final.

Chris Carroll, who finished second to Towles in heat two, started on the pole and jumped out to the early lead with Doug Schmidt and Brandon Jarsocrak in tow. The trio ran nose to tail early while Towles and Edmonson quickly moved up to P4 and P5. A few laps into the race, Jarsocrak made an inside move on Schmidt to take over second to put the Precision Performance Karting Coyote teammates in the top two positions. But a few corners later Towles would also move past Schmidt to take over third, while Edmonson exited the contest with a flat tire.

Meanwhile, MGM driver Collin Miller was playing a factor as he hung with the Carroll-Jarsocrak-Towles top three to make it a four-kart breakaway up front. With a few laps to go, Towles made the same inside move Jarsocrak used to pass Schmidt to take over second and move Jarsocrak back to third. He’d now split up the Coyote teammates and went to work on Carroll.

Carroll would continue to lead until the final straightaway when Towles went to the inside. Jarsocrak tried to make it three-wide but Towles went as low as possible, leaving Jarsocrak not much of a choice but to follow the Florida driver past Carroll. The two would clear Carroll by the time they reached the left-hander at the end of the straight, and go on to finish one-two in the exciting race.

Miller tried to follow Towles and Jarsocrak past Carroll, as well, but he got loose into the left-hander and slid into Carroll. The two wildly slid off the track and over the bank, ending the race a few corners early and denying Carroll of at least a podium after leading the entire contest. Both drivers were OK.

The Miller/Carroll crash gave Schmidt the third spot on the podium with Cale Martin moving up to fourth and Zackary Brooks rounding out the top five.

James Inscoe, Jesse Samples Jr. and Kevin Medearis were the class of the 11-kart Masters field. Inscoe won both heats Saturday with pole award winner Samples P2 and Medearis P3. Unfortunately for Samples, he’d drop out after completing only one lap in the final, leaving Inscoe and Medearis to battle it out for the win.

Inscoe led the entire contest before Medearis passed him on the backstretch on the final lap. Medearies would cross the finish stripe 0.194 seconds in front of Inscoe for what appeared to be the win, but he’d become the third driver of the weekend to be disqualified from a win in post-race engine tech. Inscoe, the 2020 Maxxis Masters champion, would close out the series with a Grand National win on his No. 117 Coyote Zenith chassis.

The pair of Junior classes were probably the most competitive of the weekend. Nearly the entire field showed great speed at different points of the event, and the lead pack in both features consisted of either four of five karts.

Come Sunday, Peyton Bridges, Brently Miller and Owen Lloyd solidified themselves at the front of the pack in both races with .

Junior Black was the early main event and on the final lap the four drivers traded positions several times. On the final lap, Donahue and Lloyd raced past Miller for the lead on the backstretch while Bridges also went through to put Miller back to P4.

Donahue was now out front and Bridges made a cross-over move on Lloyd to pass him for second. He also got to the inside of Donahue for the lead in the final left-hander. The pair made contact but Donahue was able to keep his momentum and hold off Bridges for a 0.094-second win. Bridges settled for P2, Miller P3 and Lloyd P4. Camryn Reed rounded out the top five of 14 starters.

Junior Yellow was the last race of the day and in this one Lane Littleton was in the best spot on the last lap. Littleton led a train including Bridges and Miller past Lloyd’s Coyote on the final straightway. Littleton was able to hold off Bridges in the final corners to take the win in his only appearance at a Maxxis race this season. Bridges again settled for P2 with Miller and Lloyd again P3 and P4. Pole award winner Brady Atwood completed the top five of 13 starters.

The Swann duo switched it up in Stock Medium with Tyler taking the win over his dad. Josh Loftin was third and Buff fourth.

Buff closed the series with an undefeated season in Vintage Super Stock, although Cameron Plyler made him work for it. Plyler passed Buff on the final lap before Buff retook the position. This all happened on 103rd Street’s 1,000-foot backstretch. Buff and Plyler were the only two entrants, while the Stock classes each only had four entries, their shortest fields of the year. 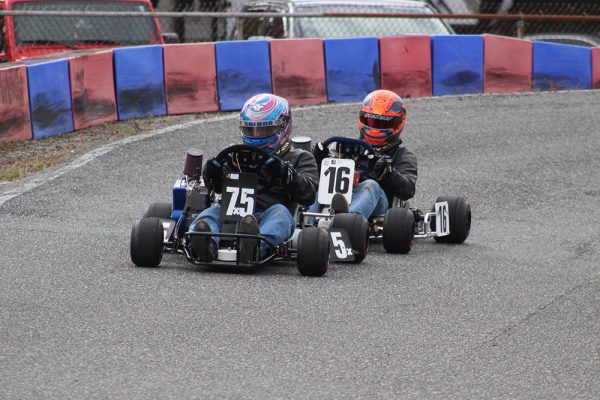 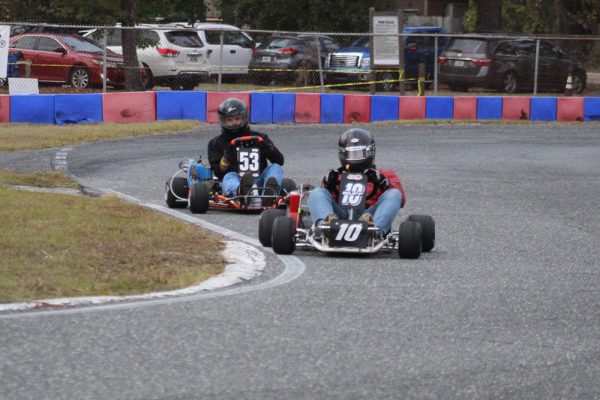