MOORESVILLE, N.C. – Friday night rain drenched GoPro Motorplex in Mooresville, N.C., and a morning round of practice, qualifying, pre-finals and finals for six divisions still hand’t fully dried the racing surface by midday Saturday at Round 1 of the 2021 Karting Challenge.

While no rain actually fell Saturday morning, racers were forced to compete in wet and cold conditions throughout the morning class group as temperatures persisted in the mid 40s.

Briggs Cadet, Junior and Senior Heavy all competed Saturday morning. By the time finals rolled around, the racing surface finally began to slightly dry, making it decision time between staying with MG rain compound tires or gambling and bolting on the MG slicks.

Cadet was the largest Briggs class of the day with 23 racers taking the green flag just after 11:45am. With the track still mostly wet, nearly every driver raced with MG rains.

Keelan Harvick and Davin Roberts showcased themselves as the class of the field in the 13-lap contest. The pair distanced their machines from the rest of the pack and traded the lead several times before Harvick took the top position for good on lap 9.

While Roberts did everything he could to hang with Harvick’s No. 62, he wouldn’t be able to mount a challenge over the last couple laps. Harvick’s Nitro Kart would cross the stripe about two kart-lengths (0.250 seconds) ahead Roberts’ Nitro. Gianmatteo Rousseau ran all alone in third, then a tight pack consisting of Jason Noe, Jared Clarke and Ethan Jaques would finish fourth, fifth and sixth.

The story for us was the domination of the Nick Tucker’s Nitro chassis in 206 Cadet. Nitros filled seven of the top-eight finishing positions in the class, including the entire top five. Sixth-place finishing Jaques was on a Tony Kart.

Similar to Cadet, nearly every Briggs Junior starter went out on rain tires and the 13-lap final featured a two-kart breakaway at the front of the field.

Christopher McKeithan and Oliver Piatek left the rest of the 17-kart field to settle this one amongst themselves. McKeithan placed his No. 319 Nitro in the lead early and never relinquished it. At times Piatek’s Tony Kart would close within a couple kart-lengths, but McKeithan was able to maintain the gap.

McKeithan would take the checkered flag 0.464 seconds in front of Piatek in a mostly clean race. Riding a Nitro, George Wheeler would ride uncontested throughout the race to take third, over 15 seconds behind the winner. Katie Yonchuck had a terrific ride on her MGM, starting 11th and making it all the way to fourth. Will Loller made the trip down from Maryland and rounded out the top five on his Margay.

Danny Dyzelski was a notable exception from the top five. After finishing P2 to McKeithan in the pre-final, Dyzelski gambled in the final by bolting on slicks as the track continued to show more dry spots leading up to the race. The gamble didn’t pay and Danny D would finish as the last kart on the lead lap in 16th. Luke DaCosta, normally another front-runner in Junior, was the only other driver to gamble with slicks and he’d finish a lap down in 17th.

The decision between rains or dries was more interesting for the final Briggs feature of the morning group, Briggs Heavy. Nearly half of 13 starters went out on slicks, including the pre-final P1 and P2 finishers Todd Baron and Tim Skinner.

Both Baron and Skinner immediately slid back on the first lap before settling in around sixth and seventh. This gave third-place starter Connor Yonchuck the opportunity to take the early lead on his No. 99 MGM which was utilizing rain tires. Yonchuck would pace the field for the first four laps while Salisbury, N.C.’s Victor Turner, also on rains, was moving up on his No. 26 Redspeed chassis.

Turner used an inside pass in turn one as his preferred overtaking maneuver. He’d pass Shaun Pulver for second on lap 3 and follow it up with the same move on Yonchuck for the lead on lap 5.

Midway through the 14-lapper Turner looked to be the clear winner until Chase Anderson, also on rains, began to make things interesting on his No. 118 MGM. Anderson had moved past Pulver and Yonchcuk to move into P2 and by lap 9 he had closed to Turner’s rear bumper by lap 10.

Anderson, who works part time at the MGM shop, surprised Turner into turn 11 on lap 12, making an inside pass as the pair came to the two-lap-to-go signal. But Turner wouldn’t be denied after leading most of the race; he’d muscle his Redspeed back past Anderson’s MGM in the hairpin on the final lap before Anderson shot back underneath Turner in the 11th and final corner. But Anderson slightly overshot turn 11 when making the pass, allowing Turner to use his experience to cross back underneath Anderson on exit to score the victory by about a kart-length.

Anderson would settle for second with Brian McCann’s No. 3 taking third. McCann gambled to start the race on slicks and it nearly paid off; he was coming on strong at the end and posted the race’s fastest lap with a 1:02.300. If the race had been a handful of laps longer, McCann likely would have caught Turner and Anderson to make it a three-kart battle for the win.

Yonchuck would fade on his rain tires and finish fourth with pole starter Baron rounding out the top five.

We had time to catch up with Turner and Anderson after their battle for the first Briggs Heavy triumph of the 2021 Karting Challenge. 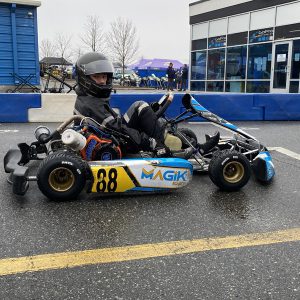 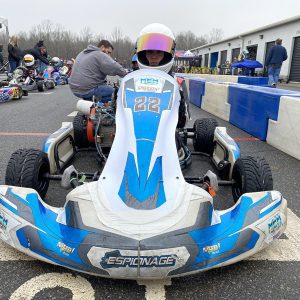 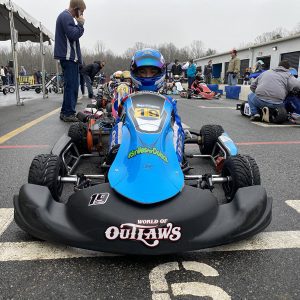 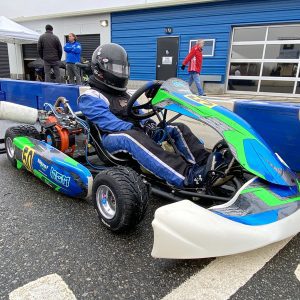 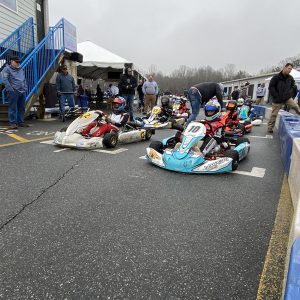 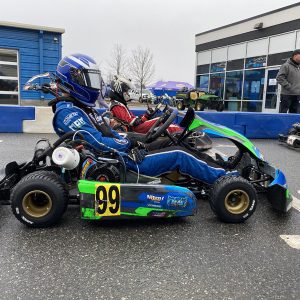 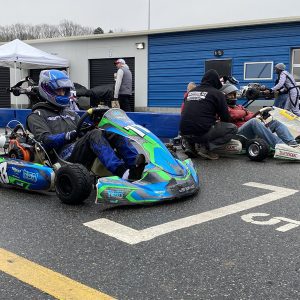 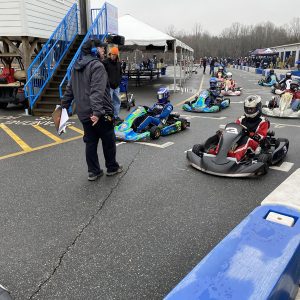 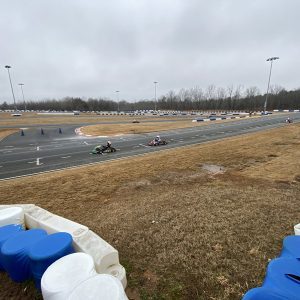 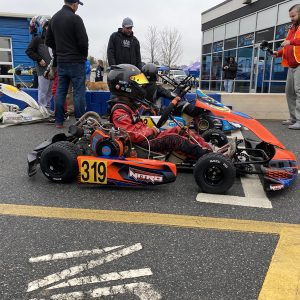 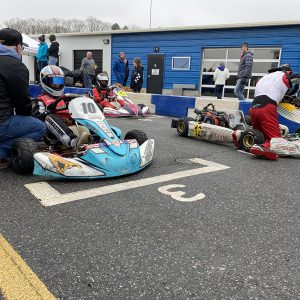 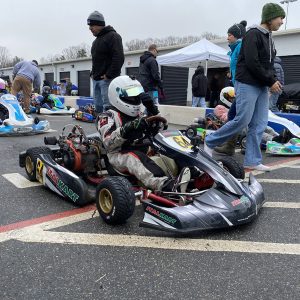 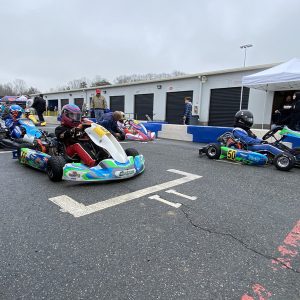 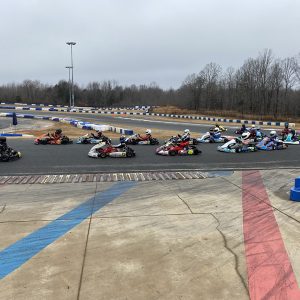 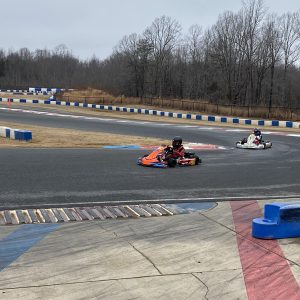 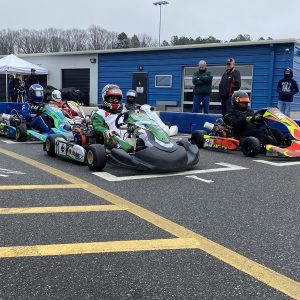 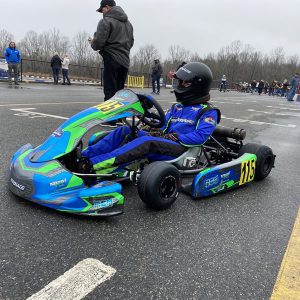 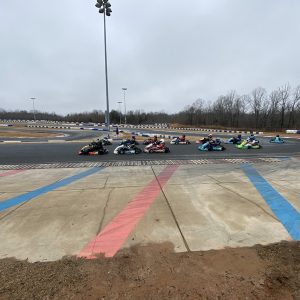 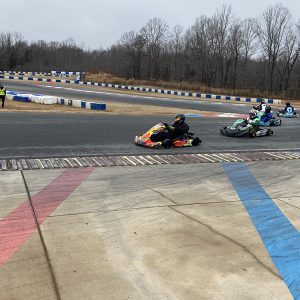 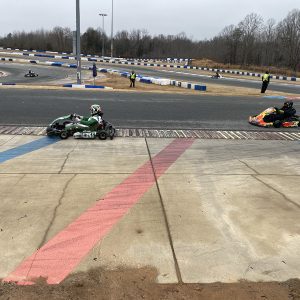 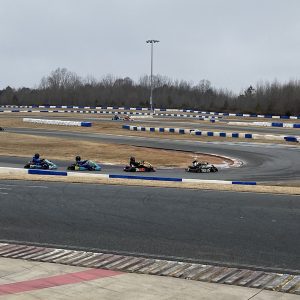 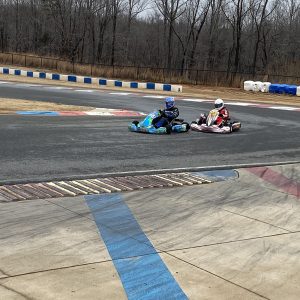 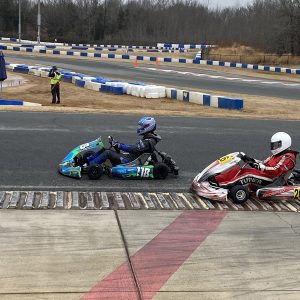 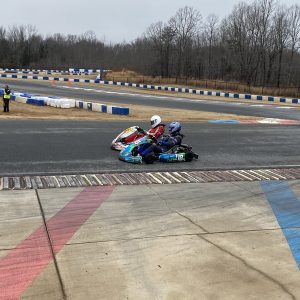 Unofficial Results (how they crossed the finish line):