WAMPUM, Pa. — The 2022 AKRA / Hoosier Kartsport National Road Race Series is now in the record books with the running of this past weekend’s Dart Kart Club-hosted Pittsburgh Nationals at Pittsburgh International Race Complex’s 2.8-mile Full Course, the sixth and final round of the series.

This year’s Pitt Nationals was another successful one for Dart Kart and AKRA with a total of 252 drivers practicing Friday and 732 race entries totaled between Saturday and Sunday competition. Compared to 2021, this year’s event had 15 more practice entries but fell short of last year’s race entry total, which was 843.

One of the reasons for the decrease in overall entry count was the weather. Summer-like temperatures in western Pennsylvania ended only hours before many racers arrived Thursday afternoon. Rain, cold and gusty winds greeted teams during Thursday’s move-in before giving way to cool but dry and pleasant weather for Friday’s practice and Saturday’s first day of racing.

Mother Nature would make her presence known again on Sunday as more rain moved into the area overnight and stayed, albeit on and off, throughout the final day of racing, certainly costing the event some entries. With a number of teams leaving first thing Sunday, by late morning the Pitt Race paddock appeared only about half full compared to Saturday.

Looking at some of the headline divisions, Saturday’s Yamaha Pipe Final 1 was the largest class of the weekend with 38 drivers taking the green flag. LAD Specialties Wisconsin racer Patrick Olsen scored the win by a 4.6-second margin over Ohio’s Colin Jedrzejek. Nate Grindell was P3, Jason Lorang P4 and Nick Cole P5.

Florida’s Kekai Hauanio won Sunday’s Yamaha Pipe final over Olsen and Nate Grindell with Jedrzjek P4 and Scott Stauffer P5. The division’s day-two final was one of the few to run in the dry, although it was red flagged just past halfway due to lightning as another afternoon storm approached.

Mike Ray and Simon Kowalski each scored their first wins of the weekend with Ray claiming Stock Honda Heavy by 4.6 seconds over Virgil Gross, and Kowalski winning C-125 Shifter by nearly 5 seconds over Joseph Barth and Brian Wake.

Kassy won Saturday’s DKC IAME Sprint Final 1 by a half kart-length over fellow WKC racer Greg Heberle. On Sunday the Purdue University sophomore would win CIK 125 TaG Lite over Brandon Worthington and close out the day with a CIK 125 TaG Medium win in the rain over John Adams.

Rice completed her outstanding 2022 AKRA season with three more wins to add to her growing resume. The North Carolina teenager opened her weekend with a dominating 21-second win over Ryan Miller in 100cc Air Cooled TaG F-1. She’d return Sunday in the rain to score the DKC IAME Sprint Final 2 contest by 7 seconds over Heberle and Saturday winner Kassy, and she completed a sweep of 100cc Air Cooled TaG in another dominating drive, this time over David Casaperalta and Eric King.

Ray didn’t stop Saturday as he bolted on the rain tires and proceeded to finish P2 to Torres in Stock Honda Lite Final 2 before closing his weekend with a second Heavy win, this time by 0.473 seconds over Mark Eller.

Simon Kowalski swept the G-125 Shifter finals at Pitt. Kowalski opened his double-win weekend with a 4.8-second triumph over Joseph Barth in Saturday’s final. Brian Wake was right behind Barth in P3.

Kowalski was four of 14 drivers signed in to take the G-125 Shifter green flag in the wet on Sunday. He fended off challenges from Tommy Plahitko to cross the stripe a half-second ahead for his second win of the weekend.

The Hegar Manufacturing family team traveled to Pitt from their Portland, Oregon, area base — some 2,500+ miles and 38 hours via highway — and they came away with several wins.

Cole Hegar showed his prowess in the rain in Sunday’s first race, which including CIK 125 Shifter Pro Final 2. Cole dominated the 15-minute contest, crossing the finish stripe nearly 13 seconds ahead of Lance Lane for the win.

As the racing weekend was nearing a close, it was Ryan Hegar’s turn to put another Hegar Manufacturing kart in the win column. In the rain, Ryan would drive to a 10-second win over Pascual Torres in CIK 125 Shifter Final 2. Steven Waddell was P3.

Mallory D’Augustine scored a couple of wins Saturday. The Ohio driver opened her weekend with a Piston Port Sprint Final 1 triumph by 1.9 seconds over defending Pitt winner Jim Sorrentino. Jerry Apuzzi was 7.3 seconds back in P3 of 11 starters.

The fastest kart in attendance Saturday was the No. 24L 250 Super Kart of Andy Kiker. The New Jersey veteran turned quick times in the 1:43 bracket on his way to the 250 Super Kart Final 1 win. Johnny West was second and Jeremy Baldi third. Baldi would return Sunday to score the Super Kart Final 2 in the rain over West. 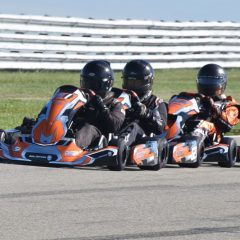 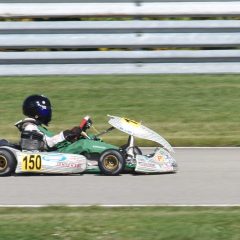 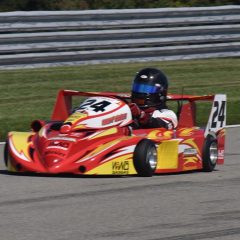 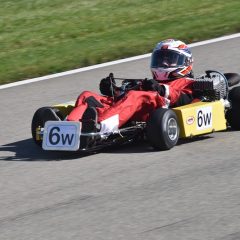 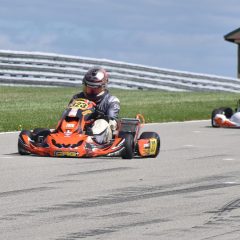 Dart Kart and AKRA officials wish to thank everyone who attended this year’s Pittsburgh Nationals and all the teams and racers who participated in the 2022 national tour including events at Summit Point, Mid-Ohio, Nelson Ledges and Gingerman. The season was another successful one for AKRA and its host clubs with outstanding entry counts and competition across the board, especially considering the rising travel and cost-of-living expenses that we’ve all encountered this year.

Also, many thanks to the racers and teams representing the Championship Enduro Series, WKA and Woodbridge Kart Club who attended Pittsburgh. The event was a points-paying race for each of the five series mentioned, and with all the series’ support, the Pitt Race pit area was full with teams from across the country for the third consecutive year.