CONCORD, N.C. — After successful opening rounds at Jacksonville in April and Barnesville in May, the Maxxis 4-Cycle Sprint Series will make its second annual visit to the Charlotte Motor Speedway Kart Track this weekend — June 18-20 — for the Charlotte Showdown Battle for the Belt.

The first three-day weekend event of the season — practice plus a 206 Masters and Vintage money race Friday followed by two full days of Briggs LO206 and vintage racing Saturday and Sunday — will be the best-attended race of 2021 thus far for the Maxxis series. We expect double-digit entry counts in a number of classes and with the type of close racing the 0.65-mile Charlotte sprint track produces, nearly every class’s feature should come down to the final corners as drivers race for some high-quality, intriguing prizes.

Those prizes include the traditional winner cups for Saturday feature winners and a special Maxxis winners belt for Sunday winners. The belts, valued at over $200, have been a popular prize at some Maxxis dirt nationals and this will be the first time sprint racers vie for them. Each day’s feature winners also will receive a race winners hat and sticker, while other podium finishers will receive P2 and P3 awards. Plus, the Maxxis Series always raffles off creative prizes such as coolers, outdoor chairs, toolboxes, etc. at their event’s drivers meetings.

Still time to save a few dollars and pre-enter. Pre-registration closes Wednesday at 5pm. – click here.

This weekend marks a return trip to Charlotte for the Maxxis group. After the track’s repaving and renovations in 2019 and early 2020, last summer Maxxis was the first touring series to revisit the track after it sat dormant for a number of years. The race last summer certainly helped rekindle the CMS kart track’s popularity as it received rave reviews from racers, and there have already been a couple of series events there in 2021 before Maxxis’ return this weekend.

“Charlotte has always been a great track,” MGM Chassis owner Paul Rice commented. “With the repaving and improvements they made, it’s definitely better than ever before. It’s smooth, fast, wide, good curbs, technical in some sections. It really has everything that goes into making a great sprint track. We have a lot of customers looking forward to coming out next weekend for the Maxxis show. Everyone in our group is looking forward to it.”

Tight points races for many

While some racers may be making their first Maxxis start of the season this weekend, many others will not only be focusing on racing for feature wins, they’ll have an eye on their class’s 2021 points race, as well.

Entering Charlotte, there are many close battles for class championships that drivers will have in the back of their minds. The 2021 points series runs through Round 6 at Carolina Motorsports Park in August, while the season closing Grand Nationals at Jacksonville in November is a non-points event where Grand National champions are crowned.

Adam Wein has been the top dog in the Cadet divisions so far this year on in Razor chassis. Wein has a pretty formidable advantage in Cadet Green with a 22-point advantage over Justin Sherbert. It’s closer in Cadet Yellow, which shows Wein ahead of Thomas Nichols by only 6 points.

In Kid Kart, which has eight drivers already signed up for Charlotte, Colton Glass enters as the points leader over Parker Stewart by a 7-point gap. Canon Love is only 8 points out of the lead in the third spot. 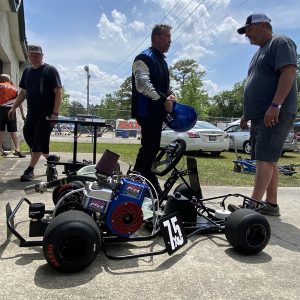 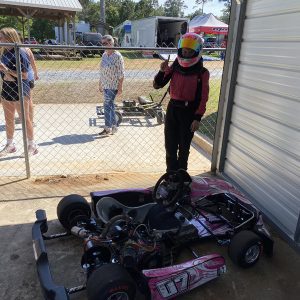 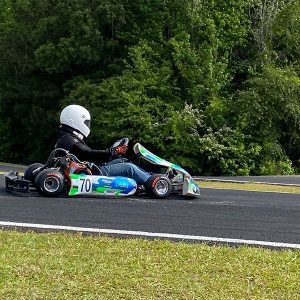 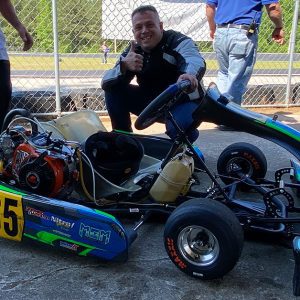 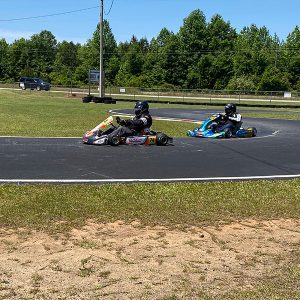 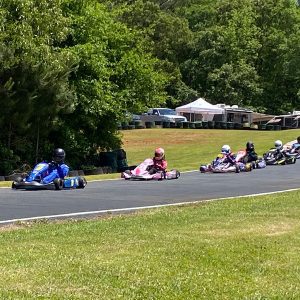 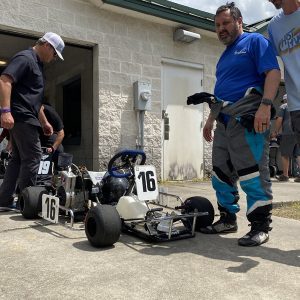 Both Junior classes are tight at the top of the standings. K Mike Chidester, who hasn’t won a feature yet but has been up front in nearly every round of competition at Jax and Barnesville, is 3 points ahead of Brady Atwood and 6 ahead of Alyssa Vascocu in Junior Yellow.  Junior Black shows Vascocu currently on top of the standings by 4 points over Atwood with Chidester 7 markers out of the lead in third.

The Senior Medium division looks like it will come down to Cale Martin and Kenny Buff. Martin enters Charlotte just 2 points on top of Buff. Neil Moore in in control of Senior Heavy as he’s been the only driver who raced the class at both Jax and Barnesville.

Masters points may be the closest of any division. Maryland’s Brandon Hollenbaugh, who scored his first national win at Barnesville last month, leads by a mere single point over Moore. Roy Avery in only 5 points out of the lead in third and Chris Ball is just 11 points back in fourth.

The competitive Vintage Stock Medium and Heavy classes have been all Billy Johnson and Tyson or Tyler Swann so far. Johnson is 14 points ahead of Tyler Swann in Medium with Chuck Watkins sitting third, 18 markers out of the lead. In Heavy, Tyson Swann enters Charlotte 10 points on top of Johnson with Watkins again in third, currently 17 points out of the lead.

With the hot summer season now upon us, this weekend’s Charlotte race marks the first of three Maxxis events over the next few months. After this weekend, Maxxis will be back in action in less than a month for their return trip to Maryland July 9-10 at Sandy Hook Speedway, where a number of series regulars call their home track.

About a month after Sandy Hook the tour returns to the Carolinas for an August 13-14 show at Carolina Motorsports Park in Kershaw, S.C. To our knowledge, this is the only series race at the CMP kart track of any kind this year.

The 2021 Maxxis Sprint Series closes with their big Grand Nationals November 19-21 at the 103rd Street Sports Complex in Jacksonville, Fla.

Keith Shampine of The Kart Lounge will be at Charlotte all weekend to cover the action. We’ll provide Facebook Live videos, photos, recaps and interviews with winners plus other news throughout the weekend. We’re looking forward to another great event with the Maxxis Sprint Series!