MOORESVILLE, N.C. — Connor Yonchuk of Winston-Salem, N.C., kept his momentum rolling from a championship season in 2021 with a double score Saturday in the senior Briggs LO206 finals at GoPro Motorplex’s first round of their 2022 Karting Challenge.

Yonchuk drove his Flash Engines-powered No. 99 MGM Espionage to final wins in both Briggs Senior and Senior Heavy while Christopher McKeithan won Briggs Junior on his No. 319 Nitro and Carter McMurray, son of Daytona 500 winner Jamie McMurray, scored in the Briggs Cadet final aboard his No. 440 CompKart.

Briggs Senior was the only LO206 class in Saturday’s morning schedule and 27 drivers took time in qualifying to make a solid field for the season opener.

To no one’s surprise, Todd Baron went fastest in the cold morning qualifying session with a quick time of 59.442 on his No. 11 OTK Exprit. Yonchuk was P2 with Victor Turner, Ryan Casner and Luke DaCosta filling out the top five and the only drivers under 1:00.

Baron, Yonchuk and DaCosta formed a three-kart breakaway in the Senior pre-final and opened up a big gap on the rest of the field. Baron led the first half of the race until DaCosta and Yonchuk took turns at the front throughout the later stages. Yonchuk would shoot past DaCosta’s Coyote Zenith for the lead on the backstretch on the final lap while Baron followed through for P2, moving DaCosta back to third. The three would cross the finish stripe in that order.

Cam Burris led a nine-kart pack across the line to take P4 ahead of Collin Miller in P5. 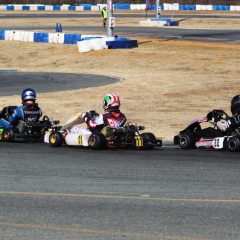 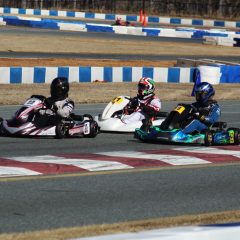 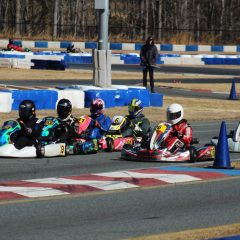 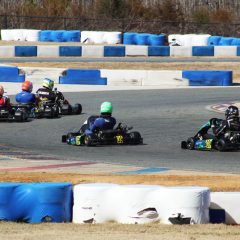 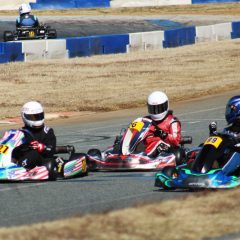 In the main event, once again Yonchuk, DaCosta and Baron jumped out to a big lead in the early stages. Yonchuk would lead the first half of the 15-lapper while Turner, Miller and 2021 GoPro Junior champion George Wheeler ran nose to tail fourth through sixth. Jacob Schneider, Casner, Collin Jarrell and Dylan Amundsen rounded out the top 10 positions at halfway.

Baron went to the lead just past halfway, moving Yonchuk back to second as the pair worked together to put some gap between them and DaCosta. Steady lap traffic began to play a factor throughout the last quarter of the race as DaCosta worked to close the gap on the lead pair. Meanwhile, Turner and Wheeler were working hard to catch the top three as Miller began to fade in sixth.

Turner and Wheeler would get the break they needed with a lap to go as Baron, Yonchuk and DaCosta began to battle hard for the win. The trio went three-wide into turn one on the final lap with Yonchuk having the inside line and taking the lead. Both Baron and DaCosta would lose ground to the new leader as Wheeler and Turner shot past both drivers to move into P2 and P3.

Wheeler would mount a challenge for Yonchuk in an attempt to win in his first senior race but the defending class champ had enough to close out a strong morning with the final win, crossing the stripe about a half-kart-length in front of Wheeler’s MGM.

Yonchuk talked about his morning and fast start to the season after winning the 2021 Briggs Senior GoPro championship.

“The day started off really good. We qualified second and had a strong pre-final racing against Todd and Luke, who both drove me very clean. The final was also a very clean, fun race and we were able to come out with the win after George Wheeler almost got me at the line,” Yonchuk commented.

Yonchuk and Turner opened the afternoon schedule with identical lap times in Senior Heavy qualifying, both at 58.204. Yonchuk would get the nod for the pole with a better second lap than Turner’s. Baron would time P3 with Rafael Leon P4 and Tim Skinner P5 of 16 drivers to take time.

Baron, Turner and Yonchuk separated themselves in the pre-final to finish nose to tail in that order with Skinner about 10 kart-lengths back in fourth and Leon rounding out the top five.

GoPro’s lighting system was on for a cold 14-lap Heavy final with the temperature at about 50 degrees and feeling a good bit colder than that with stiff winds continuing from the late afternoon. 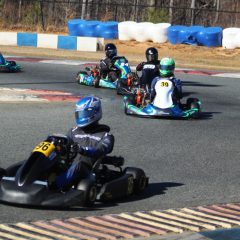 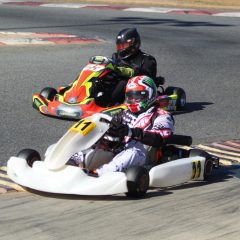 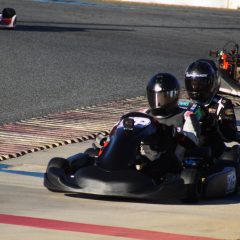 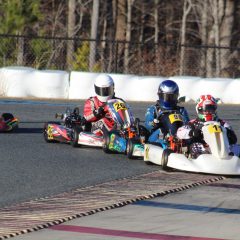 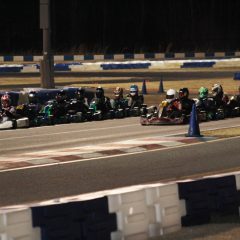 Once again a three-kart breakaway up front saw Yonchuk, Baron and Turner moving away from Skinner to settle the race amongst themselves. Yonchuk would lead early before giving Turner the opportunity out front during the second half of the contest. Baron continued to wait for a mistake by either driver in P3.

Baron would make his bid for a feature win to close out the day. He’d move past Yonchuk to take P2 with two laps to go then quickly follow it up with a pass on Turner for the lead. Yonchuk followed into P2 and would go to work on Baron on the final lap.

Coming out of the hairpin, Yonchuk looked high on Baron’s Exprit heading into the double right. He’d use a crossover move to shoot to the inside of Baron on exit, moving into the lead and helping Turner follow through for P2. Yonchuk would lead uncontested into turn 11 and cross the finish line 0.276 seconds in front of Turner’s No. 26 RedSpeed chassis for the win.

Baron, who next to Yonchuk was consistently the strongest Briggs senior racer on the day, would have to settle for third. Skinner was all alone in fourth, 6-plus seconds back of the lead pack. Collin Miller led a four-kart group across the line to round out the top five. Dylan Amundsen was sixth, Leon seventh, Brian McCann eighth, Chase Anderson ninth and Cale Martin 10th.

Yonchuk offered up some comments on his Briggs Heavy runs Saturday afternoon.

“The Heavy class started off even better after the track warmed up and we picked up lots of speed. We qualified pole and ended up third in the pre-final after they moved the barriers in turns one and two and we had the wrong gearing for the straights.

“The sun went down for the final and track lost lots of grip but we adapted,” Yonchuk continued. “I pushed Victor (Turner) most of the race with Baron right behind us. I made a big mistake and Baron got by us late and then got by Victor for the lead. I caught back up to him with a lap to go and made a crossover move with one corner to go. Overall it was a great day for us to start the year off and I hope to keep the momentum going. I have to thank my mom and dad, MGM Chassis, Chase Anderson, Flash Engines and the Reaves family for all the support.”

McMurray, riding a Timmy Tech-prepared CompKart, offered up a sweep on the day with the pole award, pre-final and final triumphs.

McMurray cleared the field by 0.336 seconds in qualifying with a fast lap of 58.681 — the only driver to dip in the 58s in the session. Henry Taylor was P2 and Tristan Murphy P3 of 22 entrants. 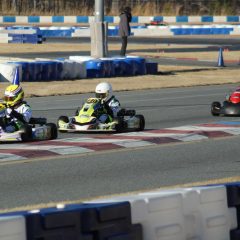 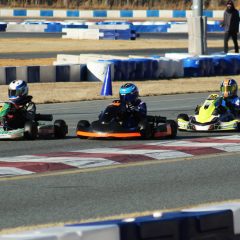 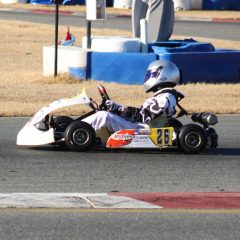 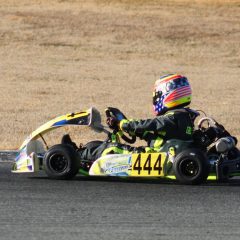 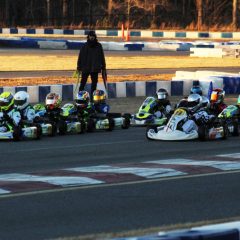 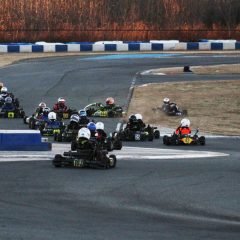 Taylor would keep McMurray honest in the 13-lap final. The fellow CompKart driver kept his No. 110 within striking range of McMurray throughout the first half of the race. Unfortunately for Taylor, he’d run into trouble at the top of hill in turn 6 on lap 9, retiring from the race after a nice drive.

Newell would slide into P2 after Taylor’s departure, but he didn’t have a shot at McMurray, who opened up another big gap to close out a dominating afternoon. McMurray would win by a 5.2-second margin over Newell’s Kart Republic. Murphy was third just ahead of Bowman in fourth. Oliver Paludo rounded out the top five in a high-attrition race that saw only 15 of the 22 starters running at the checkered and only 11 on the lead lap.

Eighteen racers made the call in Briggs Junior and Christopher McKeithan was the driver to beat all day.

The Nitro driver had his No. 319 up front throughout the 8-lap pre-final. With Clarke and Piatek in tow, McKeithan hit his marks throughout the race, including navigating some lap traffic late, to win by a 0.364 seconds over Clarke on a Nitro lefty chassis. Piatek was third on a Tony Kart with Wesley Gundler fourth and Myers fifth. 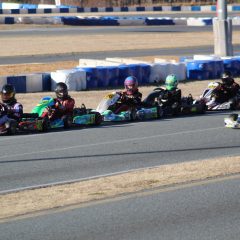 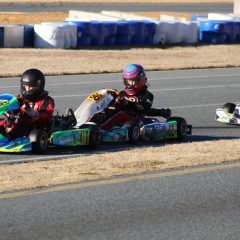 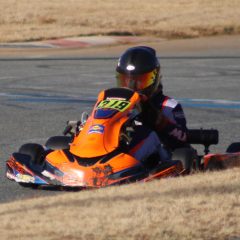 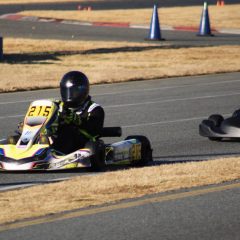 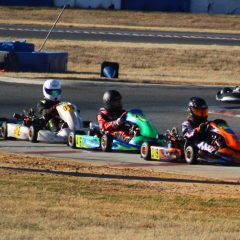 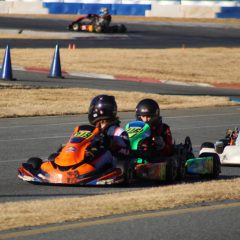 Similar to the day’s senior finals, the Junior main saw a three-kart breakaway up front with McKeithan, Piatek and Gundler separating themselves from the rest of the field while Hudson Brown moved his Coyote into fourth early in the race.

Up front McKeithan would lead the entire contest as Piatek and Gundler appeared mostly content to follow. Similar to the pre-final, McKeithan would never miss a step and went on for a 0.214-second victory over Piatek. Gundler was right there for third with Clarke over 3 seconds back of the lead trio in P4. Jacob Williams rounded out the top five.

Preveil Perkins had a nice run for P6, Katie Yonchuk was P7, Tyler Dolack P8, Gavin Myers P9 and Brown ran into problems in the late laps and had to settle for the last slot in the top 10.

Next up for the 2022 GoPro Karting Challenge is round two set for Saturday, March 19.

Kart Lounge will be at the Charlotte Motor Speedway kart track in a couple weeks to cover the second annual Cup Karts North America (CKNA) Spring Nationals set for March 4-6.