GARRETTSVILLE, Ohio — The AKRA / Hoosier Kartsport Road Race Series returned to action this past weekend in Northeast Ohio with the Dart Kart Club-hosted third round of the 2022 national tour at Nelson Ledges Road Course, where approximately 100 racers made up just shy of 300 race entries at the fast and tricky 2-mile course.

Each day’s final featured all the aforementioned racers battling at the front of the pack in the early stages, sometimes racing three-wide into the sweeping turns 1 and 2 and providing fans with some outstanding competition.

In Saturday’s 40-minute final, Rick Fulks showed his best speed of the season and led most of the first half of the race with Grindell, Olsen, Jedrzejek and others in chase. Fulks would get tied up with another kart around mid race and then fall outside of the top five, giving the lead to Grindell and Olsen, who traded it off throughout the last 20 minutes.

With less than 10 minute to go Andy Retterer gave the leaders a surprise when he came from deep in the field to drive through the pack and take the lead late in the race, only to pull pit side due to a helmet visor problem with only a few laps to go.

Olsen, riding his familiar red LAD Specialties No. 45 Coyote, led Grindell’s No. 68 Richie Warren Chassis (RWC) across the finish stripe with just over 10 seconds remaining, meaning another full lap for the top three including Jedrzejek about 2 seconds behind.

The veteran Grindell had Olsen sized up and used the final circuit to his advantage, making the pass in the last corners to score his second Yamaha Pipe win in a row after winning the Sunday race in June at Mid-Ohio. Olsen would have to settle for P2 with Saturday Mid-Ohio winner Jedrzejek P3. Randy Fulks and Hauanio crossed the stripe for P4 and P5 with Rick Fulks P6. Nick Cole, Stauffer, Brian Ellis and Adam Trumbley finished seventh through 10th.

Sunday’s final went the full 45-minute distance and this race saw Florida’s Chad Dokken and his No. 01 RWC move into the early lead with Grindell, both Fulks, Olsen, Stauffer, Retterer and others in chase.

As the race moved into its second half, Dokken continued to lead over Grindell and Rick Fulks as both Olsen and Randy Fulks faded and eventually retired early. The top three distanced themselves from Retterer and Stauffer and in an impressive drive Dokken would never relinquish the lead, crossing the checkered flag 0.275 seconds ahead of Grindell for his first win of the season. Rick Fulks was only 0.405 seconds back in P3 with Retterer and Stauffer over 10 seconds back for P4 and P5.

Next up for the 2022 AKRA Road Race Series is an August 20-21 return to Summit Point, where Woodbridge Kart Club hosts a shared event with Formula Car Promotions. 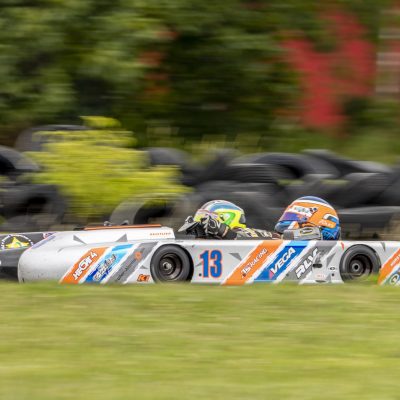 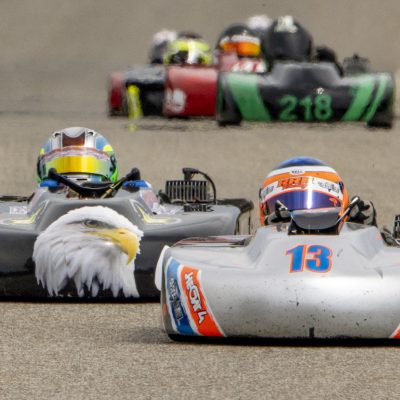 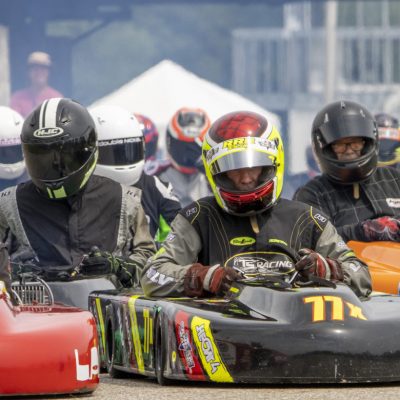