Bayliff pocketed a cool $1,000 cash prize plus other awar for his efforts.

Michael Burton joined Finn Bayliff in the last-turn win category in the Ignite Masters Iron Man, which was held simultaneously with the seniors and juniors. After trailing Mike Stephenson for most of the race, Burton set up Stephenson in the final corners to make the winning pass coming to the checkered.

In addition to cash prizes going to each class’s top-three finishers, an impressive amount of awards were presented to Ignite racers at Sunday’s podium presentation, including Garmin watches, trackside grills, Briggs grab bags and event t-shirts.

“This was a unique concept and the first of its kind for the Ignite program,” Margay’s Keith Freber said Sunday. “I believe we set a solid foundation for future Ignite Iron Man events with outstanding prize packages like we had this weekend. We will have more of these, and I encourage racers to take a look at joining the fun and competition when we announce the next Iron Man. Many thanks to the outstanding sponsors that stepped up to support this inaugural Iron Man — Briggs Racing for the Garmin watches and bags, RLV Tuned Exhaust Products for the trackside grills, and Scott Blind with Ruckus Racing for the Iron Man t-shirts.”

Originally scheduled for 60 minutes, the race was shortened to 50 minutes with thunderstorms in around eastern Indiana throughout the late afternoon. Prior to the start, drivers were informed that if rain came, starter Trey Hines would immediately show the two-lap-to-go signal and shorten the race. 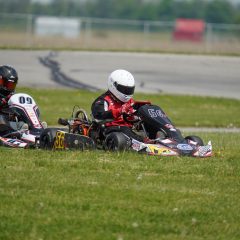 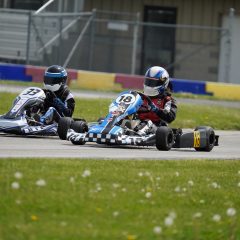 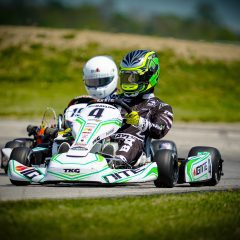 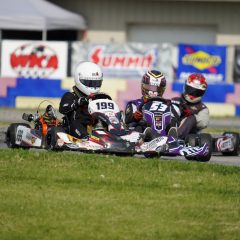 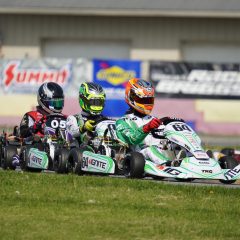 But as dark clouds rolled in and wind picked up, the inclement weather held off and the race went the full 50-minute distance.

The Bayliff brothers pulled out to an early lead over Evan Stamer and were never challenged up front. Finnegan sat behind Gavin for nearly the entire distance before making a bid for the lead in the final laps. The brothers traded the top spot a few times before Finnegan used the inside curb in the final right-hander coming to the checkered to pass his brother for his first victory of the day.

Gavin Bayliff won the Ignite Senior and KA100 Senior points-class finals earlier in the day. Finnegan finished second to his brother in both races.

Burton continued his dominance of the Ignite Masters category with the win over Stephenson, Jason Froemming and Scott Blind.

Beckman backed up her Ignite Junior win earlier in the day with an Iron Man win in the juniors over Tyler. Four Ignite juniors were in attendance but only two ran the endurance race.