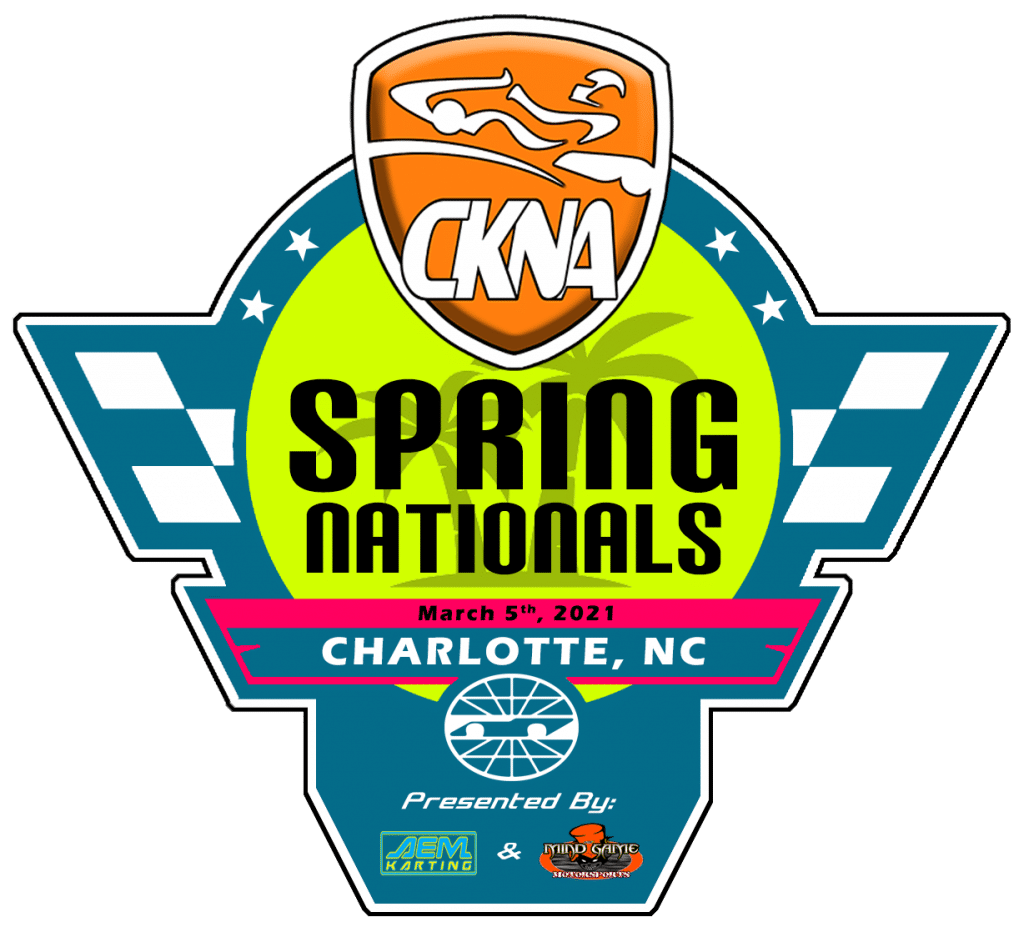 CONCORD, N.C. – Charlotte Motor Speedway will play host to one of the biggest 4-cycle national karting events of the year this weekend with the running of the inaugural Cup Karts North America (CKNA) Spring Nationals at CMS’s 0.65-mile kart track.

Each division will get around five practice sessions Friday, a quick warm-up Saturday morning then qualifying and either two or three heat races, and a final warm-up Sunday morning and then any LCQ races that are needed and a single main event final, which, as noted on the CKNA website, the winner takes all!

It should be quite an exciting event and it’s anticipated to be the most attended CKNA race in the organization’s history other than their annual fall Grand Nationals at New Castle, Ind.

If you had to choose a headline division, we’d point to Senior Medium. With 54 pre-entrants, a number of drivers will double-dip by running either Light and Medium or Heavy and Medium.  These drivers include heavy hitters like Jacob Donald, Mick Gabriel, Corey Towles and Colin Warren in Light and Medium, and Elmer Edmonson and Eric Fagan in Heavy and Medium.

There will be plenty of other drivers in the mix in Senior Medium. Looking up and down the entry list, you’d expect (in no particular order) Pauly Massimino, Brandon Adkins, Sean Meier, Connor Yonchuck, Zach Linsell, Chris Carroll, Dylan Amundsen, Brandon Jarsocrak, Collin Miller, Hayden Jones and surely others to be contenders. (If you think we missed someone, feel free to comment below!)

Last week we caught up with a couple of the favorites in both Senior Light and Medium, Lockport, Illinois’ Mick Gabriel and Naples, Florida’s Colin Warren.

Gabriel, fresh off a pair of wins in the Senior Light and Medium finals last month in the Cup Karts South opener at Bushnell, Fla., has at least six other racers who’ll be running under his and Chris Surdenik’s AEM Karting / AEM Engines tent this weekend. Gabriel has never raced at Charlotte and admits he’ll have to adapt quickly to the 13-turn course.

But his inexperience at CMS won’t change his goal. The 24-year-old Tony Kart driver says he’ll be looking for a sweep of the Light and Medium finals this Sunday.

“Every race is the same goal,” Gabriel said. “A couple of podiums would be good but the ultimate goal is to sweep both classes. Since we switched to 206 from TaG racing, most of the tracks we’re going to right now, especially in the South, I’ve never been to. We always adapt quickly and that makes me confident going to Charlotte.”

Gabriel says although the Spring Nationals is going to be a huge event, he’ll treat it as any other race.

“I don’t treat any race any smaller or bigger than the other ones. It’s just another race; we’ve been racing in Florida so much lately that it feels like just another race down south for us.”

When asked who he feels will be tough competition, Gabriel noted he doesn’t normally focus what his competitors are doing, but did offer a couple competitors that came to mind.

“I try not to focus on others. I’d think Colin Warren should give me a pretty good run. I feel like their program is pretty good right now. I think Jarsocrak will be tough on the Coyote. The MGM guys will be good, I’m sure,” Gabriel said.

Gabriel noted he swapped from mostly TaG racing to LO206 for the affordability of the 206 platform and to compete against larger fields. He’ll definitely get a couple of big fields to race against this weekend.

Speaking of Warren, the 23-year-old VLR chassis / TS Racing driver is another driver with Gabriel who’s raced plenty of 2-cycle in the past and now focuses mostly on 206 sprint racing.

Warren says he raced the Charlotte kart track in the WKA Manufacturers Cup Series years ago but hasn’t turned a lap at the track in over a decade. With five CKNA Grand National wins and a Margay Ignite Battle at the Brickyard Indy win to his credit, Warren should be considered one of the favorites in Senior Light and Medium.

“We’re looking forward to Charlotte,” Warren said. “It should be right up there with the Grand Nationals in terms of competition. Even with this being the first Cup Karts race there, I think prestige-wise this race and the Grand Nationals will be pretty equal. Obviously we’d like to up there and win; a win or two would be really cool with this being the inaugural event.”

We asked Warren who he thinks he’ll be competing against for wins in the Light and Medium divisions.

“I think Corey Towles will be tough. Mick Gabriel will be right up there. Dylan Amundsen has been good lately, and I’m sure a bunch of the MGM guys will be right there. I’m sure there’s a bunch more I’m forgetting. I would think the Light and Medium front-runners will be mostly the same in each class,” Warren said.

The Senior Heavy division looks to be the smallest of the senior categories with 31 drivers signed up as of Monday. The class will still be highly contested with a bunch of hot shoes ready for action. We’d expect twin brothers Tyler and Aren Lloyd of Waycross, Ga., to be tough.

In the MGM camp, Ethan Dietrich, Ryan Bennett, Edmonson, Fagan and Yonchuck are all entered in Heavy. Meier and Chris Cirillo are entered on Coyotes, while Jeff and Riley Scott will likely play factors on their IONIC Edge karts. Veteran Connor Lund is usually tough anywhere he goes on his No. 21. Don’t count out Victor Turner on a Redspeed chassis; he’s coming off a win Saturday in Senior Heavy at GoPro Motorplex’s Karting Challenge opener.

The Masters class for drivers age 35 and up should be an outstanding competition with 37 drivers pre-entered. Chris Cline would have to be considered a favorite on his IONIC Edge. He’s been up front everywhere he goes no matter who shows up. Cline is coming off a win at Bushnell at the Cup Karts South opener in February.

MGM owner Paul Rice has pre-entered in Masters. Rice ran second in the 50-kart 206 Senior at Daytona Road Race in December, and he has plenty of experience at Charlotte from WKA Gold Cup days. Tim Skinner, Matt Skaggs, Chuck Maitlen and Jeff Scott are all regular front-runners who are pre-entered for Masters.

Looking at Junior, we’d expect Owen Lloyd to challenge on his new Coyote Zenith; Lloyd drove his No. 119 to a convincing win in Junior last month at Bushnell.

Danny Dyszelski is always fast and he’s pre-entered on his No. 888. The Charlotte, N.C., racer has a wealth of driving experience in both 2-cycle and Briggs 206.

Christopher McKeithan from Gastonia, N.C., won the Briggs Junior final Saturday at GoPro and we’ll look for him to be fast on his Nitro Kart at Charlotte.

Luke DaCosta is an up-and-comer on an MGM. In less than a year of racing he’s become one of the top 206 junior racers at GoPro’s Karting Challenge series. And he’ll be racing only a few miles from his Concord home.

We’re sure there’ll be plenty of other juniors in the mix when competition starts Saturday morning.

Sportsman (Cadet) will be one of the largest classes with 48 racers pre-entered, and there are nine Kid Karts registered so far. We’ll admit we’re not very familiar with most of the Cadet racers, so we’re not going to specifically mention any drivers in this preview story. We’re looking forward to watching the youngsters in this big class mix it up this weekend.

The new Legends class has 14 racers pre-entered and most are veterans of the sport. While it will be one of the smaller classes of the weekend, it should be hotly contested. Todd Baron is one of the best at GoPro and he has his No. 11 Deadly chassis pre-entered. Florida’s Tim Clark is always tough on his MGM. Tim Stiefel and Brad Farmer will be on Coyotes. Neil Breitenbach is fast no matter what chassis he’s on; he’ll pilot an AEM Karting No. 88 entry at Charlotte.

The forecast is shaping up to be a pretty good one as we get closer to the weekend. High temperatures are predicted to be in the mid- to high-50s with sunny skies. We’re looking forward to an awesome weekend at Charlotte for the first-ever CKNA Spring Nationals! Good luck to all racers that will be competing!