Both Warren and Bridges went four for four in their respective categories at the rain-filled event — Warren in senior 206 and Bridges in junior 206.

In another dominant weekend in WKA racing, Warren did not lose a round of competition with four pole awards, four pre-final wins and four final wins in Senior 206 360# and 380#.

After a rainy Friday practice that saw the 25-year-old LO206 and 2-cycle karting veteran at the top of the speed charts in every practice round, Warren proceeded to lead nearly every lap of racing Saturday in the rain and Sunday in the dry. Only fellow Florida drivers Elmer “Moe” Edmonson and Caylyn Brown shuffled Warren back to P3 in the opening laps of Sunday’s Senior 380# pre-final. Warren quickly moved back to the lead before halfway and went on for the win. He led wire to wire in every other prefinal and final.

Edmonson and Brown were the only two drivers to mount any sort of challenges for the VLR chassis racer. Both kept pace with Warren at different stages of the event, but when Warren needed some extra speed, it seemed like he’d be able to push a little harder and extend the gap on his competition.

Click here to ride onboard with Moe Edmonson during Sunday’s Senior 380# prefinal.

Bridges’ work in the junior class wasn’t quite as dominant as Warren’s in senior, but the 14-year-old came on strong each day when it counted most, collecting the Junior Black and Junior Yellow slide finals both Saturday and Sunday.

After trouble in qualifying in Saturday’s Junior Yellow class, Bridges advanced to P3 in the prefinal and went on to best Nathan Roberts in the 20-lap final, winning by a convincing 18-second margin.

In Junior Black on day one, Bridges qualified P2 to Florida’s Ronnie Klys but again ran into some problems, this time in the prefinal, which produced a P7 finish after contact with Klys while racing for the lead. Both Klys and Bridges made it to the front in the Black final with Bridges outlasting Klys for a 0.959-second victory.

The Razor chassis pilot qualified P1 and P2 Sunday but again had some issues in the Junior Black prefinal, where he had a mechanical problem and did not complete a lap. He’d start shotgun on the 8-kart field in the Black main event and quickly move into third after only a lap of racing. He wasted little time, moving to P1 after only a handful of laps and going on for a 7-second win over Klys and K Mike Chidester.

Bridges controlled the day in Junior Yellow, scoring the prefinal win over a strong-running Thomas Nichols and winning the final by a 5.2-second margin over Will Haire.

Click here to watch to a Saturday post-race interview with Peyton Bridges from Steering Wheel Nation’s Tom Baker in collaboration with Kart Lounge.

North Florida Kart Club racer Tim Clark made the trip north to Barnesville and came away with a pair of feature wins in the Super Masters division for drivers age 50 and up.

On Saturday, Clark and his MGM chassis did battle with fellow Sunshine State racer James Inscoe on his Coyote Zenith in a spirited 20-lap race for the win. Inscoe gave Clark all he had but Clark was able to outlast him, crossing the stripe 0.213 seconds ahead of Inscoe for his first win of the event. Robbie Davis had a solid run for P3 with Steve Lofton and Stuart Keller completing the top five of nine starters.

Sunday’s Super Masters final was another good one with Darren Bray taking advantage of a P1 starting position after a prefinal win that saw Clark and Inscoe come together while racing for the lead, relegating Clark to a P3 finish and Inscoe to P4.

Bray would proceed to lead most of the 20-lap main on his Coyote with Clark and Inscoe in hot pursuit. Contact between Bray and Inscoe resulted in Inscoe dropping back and out of a bid for the win. Then it was Clark’s turn to go after Bray and the two made contact heading into Turn 1 with only a few laps to go. The contact resulted in Bray’s Coyote sliding into the outside tire barrier; unfortunately for Bray, a fan entered the track to get Bray’s kart re-fired, resulting in a DQ.

After a long race, Clark and his No. 96 MGM had it easy from there and he went on for a 3.4-second win over Keller, who notched his best result of the event in the weekend’s final race. Inscoe settled for third with Lofton P4 for the second day in a row and Steve Mox P5.

The Masters field for drivers age 35 and up wasn’t quite as big as Super Masters but the competition was just as good. Coyote racer James Inscoe was again one of the major players, this time racing against MGM driver Tim Skinner on Saturday and Skinner and Roll Speed Performance owner Scott Heath on Sunday.

In Saturday’s main, Inscoe and Skinner waged a hard, clean battle up front with Skinner getting the best of it in the end. The North Carolina racer and Inscoe traded off the lead several times around Lamar County’s tight quarter-mile course with Skinner making the final pass and holding on for a slim 0.202-second victory. A GoPro Motorplex regular, the visit to Barnesville was Skinner’s first ever and he was pleased it resulted in a win.

Sunday’s Masters final was a good one with as Virginia’s Heath joined the class in his first visit to Barnesville and he gave Inscoe and Skinner all they wanted to handle in the 20-lapper.

With Inscoe out front, Heath cleared Skinner for P2 and proceeded to make an inside pass on Inscoe for the lead in Turn 1 several times over the last 10 laps. Each time, Heath would slide high on exit and Inscoe would slingshot back to the inside to retake the top position.

Skinner never gave up as he found room under Heath to retake second with a couple laps to go and once again challenge Inscoe. But Heath and Skinner again got battling for P2 on the final lap, allowing Inscoe to open up a couple kart-length advantage and hang on for his first feature win of the weekend in his fourth and final try. Skinner crossed the stripe P2 and was denied a double-win weekend in his first trip to Barnesville. Heath was third with Hollenbaugh fourth and Flip Davis rounding out the top five.

Thompson dominated Saturday’s racing in the rain and completed all 10 laps in the final for the win. Reed Hindrey was the only other driver to take the track in the challenging weather conditions.

On Sunday, all four drivers started with the track finally dry after two days of rain. Barrett Turley was the only driver to last all 10 laps in this one, taking the win by a 2-lap advantage over Blaise Hindrey. Reed Hindrey was third and Thompson fourth.

On Saturday, Ryan Hall scored one of the biggest wins of his young career with a pass on Lanie Thigpen about midway through the 20-lap Cadet Yellow final. He’d hold off Justin Sherbert for the score. Hall rises to the occasion when a traveling series comes to his home track; he won a Kid Kart final in May 2021 when the Maxxis Sprint Series came to town. 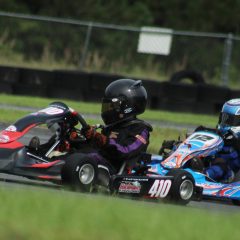 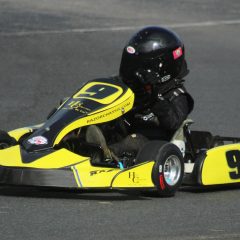 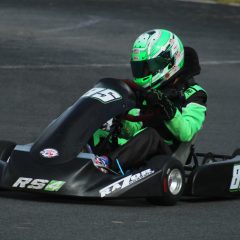 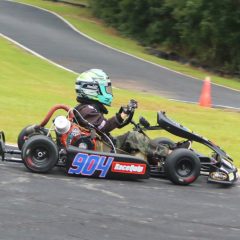 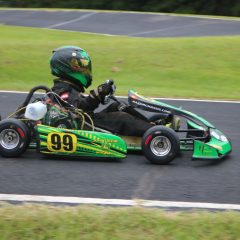 Sherbert was the winner of Saturday’s Cadet Green final after Carter Barkis was disqualified in post-race tech.  Sherbert won one the closest races of the weekend, crossing the finish stripe just 0.010 seconds ahead of Hall for the win. Thigpen settled for P3.

Sunday was all Carter Barkis as the No. 410 Parolin chassis driver won both Cadet mains to become the only double winner in the division.

Barkis first won the Cadet Green 20-lapper by a 0.295-second gap over Hall. Sherbert was third and Thigpen fourth.

In Cadet Yellow, Barkis again drove to victory in the weekend’s last race for these young drivers. He’d cross the checkers 1.3 seconds in front of Thigpen for win No. 2. Hall was P3 and Sherbert P4.

Over a half-dozen vintage Briggs Stock racers were in attendance at Barnesville, which many of them call their home track.

Teammates Robbie Davis and Tyler Swann split the Vintage mains on day one during the wet weather. Davis scored the victory in Vintage Heavy with a 9.1-second win over Friday Big Boy Bash winner Shannon Hudson. Kenny Buff was third and Tyson Swann fourth. Neither Flip Davis nor Brandon Neese started the feature.

In Vintage Medium it was Tyler Swann’s team to put the Swann Mechanical / RDR entry up front. Swann drove his No. 75 to a 3.1-second win over Thomas Neese. Buff took third for the second race in a row with Todd Horton fourth, Tyson Swann fifth and Jessica Epting sixth. Tyson was on his son Tyler rear bumper until he spun out late in the 10-lapper.

But Tyson would get some redemption Sunday afternoon in the dry with the win in a wild Vintage Heavy main event. The elder Swann had no troubles in this one but the action was behind when when Buff and Davis came together in the right-hand hairpin with a little more than a lap to go. Buff continued, but was placed at the rear of the five-kart running order for the avoidable contact with Davis.

After the incident, Davis walked away from his kart in disgust, and Flip Davis left front caught the left front of Robbie Davis’ No. 75, which was sitting idle in the track. This didn’t make Flip Davis happy and some words were exchanged near the scales, causing a short delay in the action. When the dust settled, Tyson Swann won over Tracy Pearson, Flip Davis, Robbie Davis and Buff.

The Vintage Medium main was quite a bit more tranquil as the father-son duo of Tyson and Tyler Swann raced away from the rest of the field. Tyler would notch his second win of the weekend and accomplish a sweep of the Vintage Medium category with a 0.342-second victory over his dad, Tyson. Kenny Buff was a few kart-lengths back in P3 with Thomas Neese P4 and Epting P5.

Click here to view Race Hero results from every round of competition at Barnesville WKA.

Gold Cup point standings are updated through Sunday’s fourth round of the series. Click here to view the points.

One weekend remains on the 2022 Gold Cup schedule and officials are anticipating it will be the biggest event of the three this year. The series will head to the famed 103rd Street Sports Complex in Jacksonville, Fla., to close out the year on November 4-6. Pre-registration and the event schedule will be posted in the coming weeks.

WKA officials wish to thank everyone who attended rounds 3 and 4 at Lamar County Speedway and especially those who were in attendance throughout the three-day event and braved the difficult weather.

On behalf of Kart Lounge, thank you to the WKA for having us in attendance to cover the resurgence of this competitive and exciting 4-cycle sprint program.