KANNAPOLIS, N.C. — The MGM Chassis team is ready for a busy month of April with four national events plus a big club race on tap for the next two weekends at 103rd Street in Jacksonville, Fla., GoPro Motorplex in Mooresville, N.C., Charlotte Motor Speedway in Concord, N.C., and New Castle Motorsports Park in Indiana.

Action will start this weekend, April 9-11, with the opening of the 2021 Maxxis 4-Cycle Sprint Series at the high-speed 103rd Street Sports Complex.  MGM racers from up and down the East Coast will head to north Florida for the event. 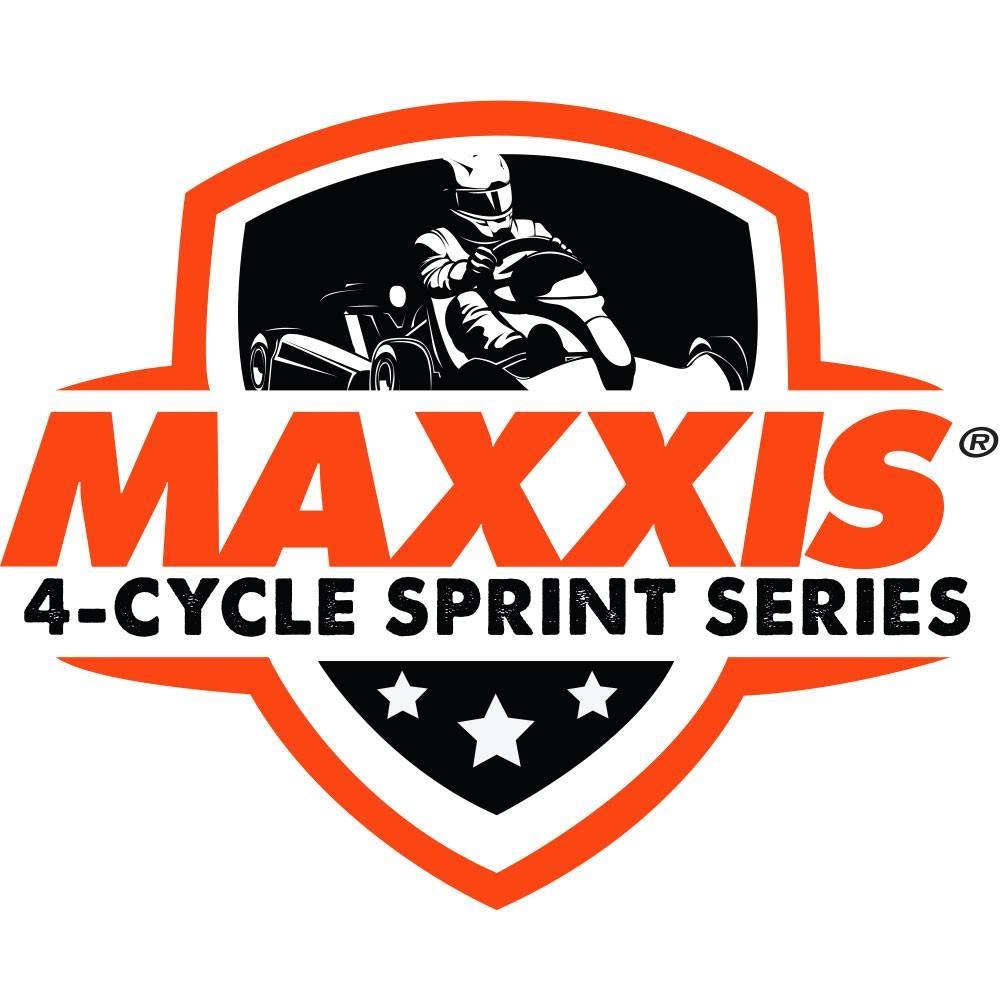 The Junior class will be full of MGM Espionages. Brothers Christopher and Colin Aiken, Brady Atwood, Andrew Brallier, Luke DaCosta, Sydney Miller and Tazzo Reep are all expected to compete. The Maxxis Series offers a pair of Junior divisions each with a different slide on the LO206 engine (Black and Yellow) and some MGM racers will compete in both while others have entered Yellow only.

There will be plenty MGM racers in the Senior ranks, as well. Laurin Brallier, Mike Clark, Elmer Edmonson, Cal Martin, Tyler Swann and Aiden White plan to be at Jax competing in Senior Medium, Senior Heavy or both divisions. In the Masters class, Chris Blue, Tim Clark, Brandon Hollenbaugh, John McFarland and Randy Reep are all preparing to compete on their Espionages.

Practice is Friday at Jacksonville with all racing taking place Saturday. Many MGM racers who competed in last year’s Maxxis tour will pick up their year-end prizes with the series’ 2020 awards ceremony after practice Friday evening.

Paul and April Rice will be in attendance at Jacksonville during Friday’s practice to provide customer support before turning around and heading back north to GoPro Motorplex for Saturday and Sunday for the STARS Championship Series first-ever appearance at the 0.7-mile course.

STARS, predominately a 2-cycle series, is offering an LO206 “Stars” division for drivers age 14 and up at 365 lbs. Collin Miller and Connor Yonchuck will take the opportunity to carry the MGM flag at GoPro in search of a STARS victory. Miller, whose younger sister Sydney will be competing at Jacksonville, will ride back to GoPro with Paul and April to compete. He’ll miss practice Friday but he and Yonchuck will be ready to challenge when competition starts Saturday morning.

Qualifying and two rounds of heats will take place Saturday and the pre-final and final on Sunday.

Further north at least 16 MGM drivers are preparing to race in the first of 14 KRA club series events this year at the famed New Castle Motorsports Park. Many drivers got some track time a couple weeks ago during a practice day at New Castle and action will get serious this Sunday, April 11 with the first race event of the year.

Bradford, the 2020 KRA LO206 Masters champion, will be making his return to the drivers seat after a serious shoulder injury at the Daytona Road Race Championships in December.

It will be a quick turnaround for MGM KRA racers with the second round of the series set for Sunday, April 25. In between, some of the MGM family will likely compete in the Route 66 Sprint Series opener at New Castle April 17-18.

Charlotte Motor Speedway will be the place to be April 16-18 with WKA’s return to the Concord, N.C., speed plant with three national events as a part of the Charlotte Karting Challenge — Road Race, Manufacturers Cup and Speedway Dirt.

MGM will be well-represented at CMS at both the Road Race on the ROVAL and Man Cup at the 0.65-mile kart track. 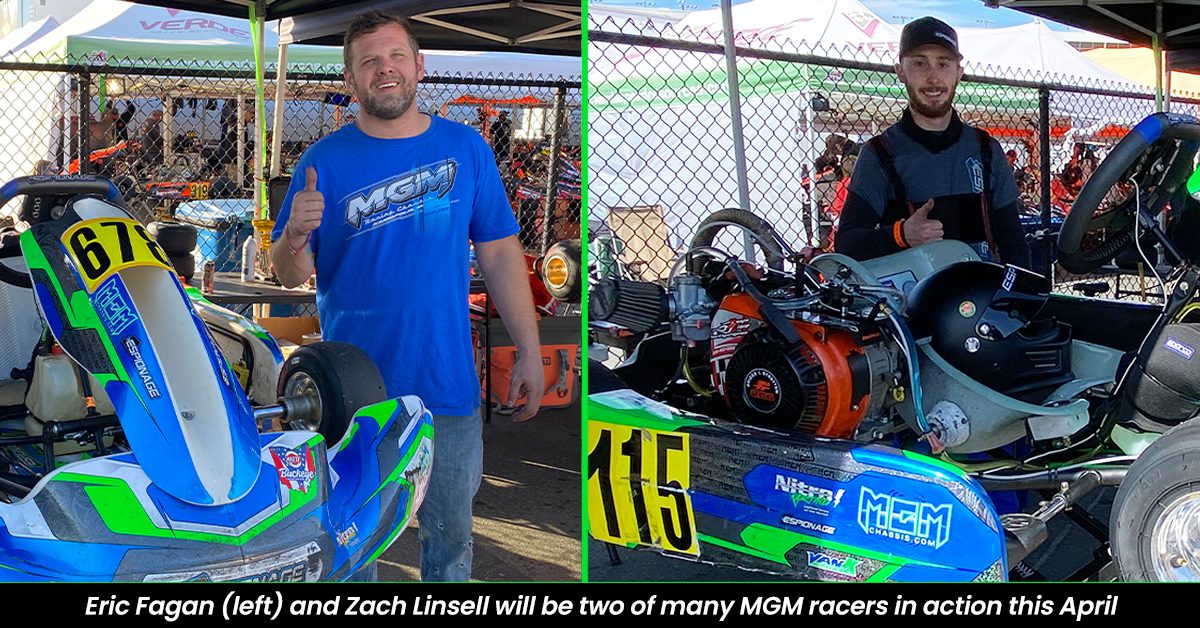 At Man Cup, Pennsylvania’s Zach Linsell and Ohio’s Eric Fagan will once again team up under the MGM tent and both will be eager to build on their performances at the Cup Karts Spring Nationals at Charlotte the first weekend of March, where Fagan finished P2 in Senior Heavy and Linsell P6 in Senior Medium.

Unlike the CKNA Spring Nationals where Fagan and Linsell competed in different divisions, both drivers will enter the only senior 4-cycle division offered which is Briggs Senior 206 at 370 lbs.

Joining Fagan and Linsell in the senior category will be Connor Yonchuck and Elmer Edmonson, both of whom will be coming off races at GoPro and Jacksonville the weekend before. Ed Weinstein will be in attendance on his No. 911 MGM as well as Ryan Bennett on the Steve Bushell-owned Espionage. Bennett had a strong run at the Charlotte Spring Nationals with a P4 finish in Senior Heavy.

At least three MGM Espionages will enter 206 Junior. Multi-time GoPro champion Sam Corry will be racing in Junior. The North Carolina driver did not run the Spring Nationals last month and it will be exciting to see how he does at the WKA race as he’s been focusing mostly on the 2-cycle divisions lately. Katie Yonchuck and Brody Kelly will join Corry in Junior on their MGMs. Expect all three drivers to be racing at the front of the pack in junior competition.

206 Junior and Senior competition will take place between Saturday and Sunday with the first two heats Saturday and the third heat and main event on Sunday.

At the Road Race, expect a bunch of MGMs in both 206 Senior, Senior Heavy and Junior, including Kyle Bickford, Kevin Darling, Racyn Hayes, Jon Miller, John Morris, James-Michael Sullivan, Travis Varney, Jeremy Yancey and Duke Zink. All drivers will be looking to add to MGM’s domination of the 206 classes at Daytona in December.

When it’s all over, it’ll be back to GoPro Saturday, April 24 for round three of the Karting Challenge.  The 2021 karting season is officially in full swing!