Following a disappointing P5 finish in the Briggs Heavy final during the morning class group, Baron clipped the Turn 11 barrier in Briggs Senior qualifying, bending the left-front spindle, king pin and other parts out of position on his No. 11 OTK Exprit. He was relegating to a P23 result of 27 drivers to take time.

Baron’s crew chief Jeff Hudlett made repairs in time for the pre-final and Baron drove a fine race to advance from 23rd to ninth in just 9 laps.

Needing a good start in the 15-lap Senior final, the 61-year-old shoe called it “a parting of the seas” when he quickly advanced from P9 to P5 in the opening corners and then passed Derek Sokol and Dylan Amundsen to move into third on the Turn 8 hairpin exit before the first lap was complete.

Baron would mix it up with Sokol and 14-year-old George Wheeler in a three-kart breakaway to settle the race. After all three drivers shared turns leading, Baron took control late and held off Wheeler to the finish for his first win of the season in GoPro’s tough club series.

“This really is one of the biggest wins of my career,” said Baron, an IKF championship 2-cycle racer from 1969 to 1980 before taking 37 years off to focus on his career as a physician. “My family including my son, daughter-in-law and wife are all here. They’re not able to see me race much, and when we were having such a dismal day earlier, I thought ‘boy, of all days my family is here and we’re doing so bad.’ But we were able to turn it around and get the win. We were fast all day but kept having stuff happen to put us behind; it was an uphill battle. Thanks to Jeff Hudlett for the hard work today.”

In other Briggs LO206 competition Saturday at GoPro, Keelan Harvick made a daring last-lap pass on the outside of Lucas Palacio into Turn 11 to take the Briggs Cadet victory.

Spencer Conrad fended off Will Loller and Christopher McKeithan to win the Briggs Junior final.

And Statesville, N.C.’s Matthew Turner made his first appearance in an LO206 at GoPro this year and promptly scored a win in the Briggs Heavy final over Victor Turner and Amundsen. 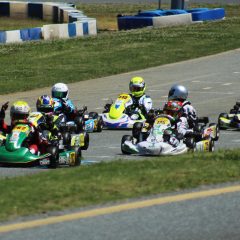 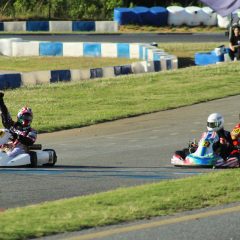 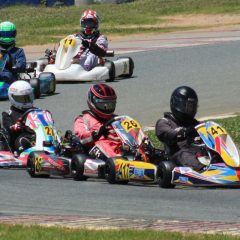 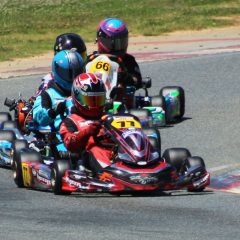 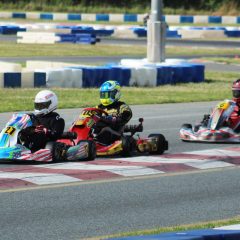