BOLINGBROOK, Ill. — With series championships on the line, AEM Karting drivers proved they were up to the task on their OTK karting products and AEM engines, completing a fantastic 2021 Cup Karts North season August 13-15 at the tour’s fourth and final round at East Lansing Kart Track in Michigan.

Gabriel conquered his preseason goal of winning the points in both Senior Light and Senior Medium for the second straight year, while Overbeck won his second CNKA championship in the Junior division (he also won Junior in 2019).

Overbeck and Zelenka again made the call for AEM in the LO206 Junior category at East Lansing, and both were two of the top competitors in the stacked 25-kart division all weekend.

On Saturday Overbeck scored his third win of the series with a close 0.165-second win over P2 in the 15-lap Junior final. Zelenka was right there, crossing the finish stripe only 0.622 seconds back of Overbeck in P3. The race marked Bacon’s first podium of the 2021 CKNA North series and proved he’s one of the best in the class after a learning curve and some bad luck earlier in the year.

Zelenka was on fire Sunday. After qualifying P2, he’d go on to win both heat races on his No. 45 EOS chassis and go into the final as the favorite. Unfortunately, bad luck would return in the final when he was battling for the lead late in the race and dropped out on the final lap due to a mechanical problem. He’d be credited with P17 and end up a very respectable seventh in the final Junior standings.

Overbeck’s consistency continued Sunday and it carried him to a prestigious class championship. Overbeck would finish P4 and P2 in the heat races and drive another flawless race in the final. Riding P2, James didn’t push the issue with a championship on the line and he’d go on to finish in the runner-up spot and clinch the Junior title for the second time in three years.

Gabriel continued as the driver to beat in Senior Light, and he’d ride P2 and P1 finishes at East Lansing to his second consecutive championship in the class. In an astounding feat, he’d finish either P1 or P2 in all eight CNKA North Light finals in 2021.

Mick would score his only final win of the weekend in Saturday’s Light final after scoring the pole earlier in the day, crossing the finish line over 4.5 seconds ahead of P2. Jerry Fandrey joined Gabriel in the top five with his best result of the weekend, a fourth-place run. Matt Winfrey was involved in a wreck on the opening lap and was a DNF.

Winfrey, racing with AEM for the first time, would get some redemption Sunday, finishing P3 right behind Gabriel in the Light final. The California racer would set the race’s fast lap in the process. Fandrey couldn’t find the speed he had Saturday and settled for P8 in the Senior Light’s weekend capper. Jerry was consistently in the top 5 or top 10 all season and finished a strong fifth place in the final standings. 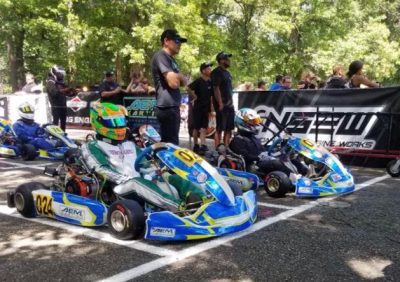 AEM at the front of the grid 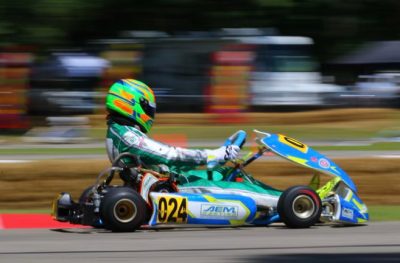 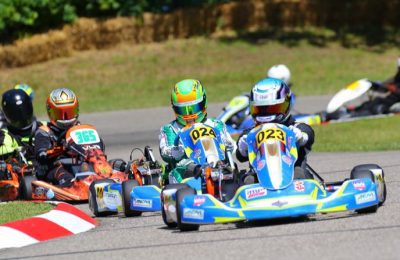 Jordan Morgan joined Gabriel and Winfrey in Senior Medium and he’d have a solid weekend on his EOS, netting final finishes of P9 Saturday and P8 Sunday. Morgan was consistent all season in his first year racing nationally with AEM Karting, and he’d end up 10th in the Senior Medium final points.

Similar to Light, Winfrey had an up-and-down weekend in Medium, albeit he was one of the fastest racers in the 18-kart class all event. On Saturday, Matt would drive his No. 024 EOS Chassis to a podium, crossing the stipe in third.

After qualifying fourth and running P7 in the first heat, Winfrey would run into trouble and DNF in heat two and the final. Although he had a couple tough breaks in his first-ever visit to East Lansing, a pair of P3 final results plus a fast time in Sunday’s Light main will have Matt confident heading to the Grand Nationals at New Castle this October.

Gabriel would win his second pole of the day and finish P6 in Saturday’s Medium final and get involved in a wreck in Sunday’s main event. Although East Lansing didn’t prove to be Mick’s best weekend of the year in Medium, it was enough to net him the class championship by a 25-point margin over second.

Momentum is high for the AEM Karting team heading to the biggest LO206 race of the year, CKNA’s Grand Nationals 5 this October 1-3 at the famed New Castle Motorsports Park in Indiana. AEM’s tent is close to full capacity, so if you’re looking for an arrive-and-drive opportunity on the multi-championship winning OTK EOS 401R chassis, an AEM engine lease or general tent space and support, contact AEM as soon as possible at info@aemkarting.com or call 312-343-0499.

————
AEM Karting is based in Bolingbrook, Ill., and is an official authorized OTK distributor, offering sales and support for OTK products, Briggs & Stratton LO206 racing engines, and many other karting brands and products that make a successful team. Led by championship-winning kart racer Mick Gabriel, AEM offers at-track coaching, tuning and support, arrive-and-drive packages and more. For more information, visit the team’s official website at aemkarting.com and follow AEM on Facebook and Instagram.