BARNESVILLE, Ga. — The Maxxis 4-Cycle Sprint Series held their second race of 2021 Friday and Saturday, May 7-8 at Lamar County Speedway in Barnesville, Ga., where sunny skies and Chamber of Commerce-like weather greeted around 90 race entries for Saturday’s 11-class program of Briggs LO206 and three vintage divisions.

Vintage Stock classes were the largest of the event with 12 drivers starting Stock Medium and another 10 in Stock Heavy. Just like Jacksonville in April, Billy Johnson and Tyson Swann split in vintage mains with Johnson winning Medium and Swann taking Heavy. Kenny Buff won the Vintage Super Stock feature.

Overall it was a clean day of racing at the tight and narrow 0.27-mile Barnesville track, easily the smallest circuit Maxxis will compete on this year. Only a handful of minor incidents occurred and all drivers and crew were OK. Most finals featured good, hard racing and several dramatic finishes, including the last three contests of the day. A nice podium presentation concluded the event around 5pm where winners and podium finishes received trophies and special awards such as Maxxis tires, tool kits and outdoor chairs.

Here’s a rundown of each class’s final Saturday afternoon at Barnesville.

Eight LO206-powered kid karts were in attendance and Ryan Hall came away the winner in the final in only his third race behind the wheel. Hall won by a solid 4.8-second margin on a Chase Elliott-themed Razor. Colton Glass finished second after capturing the Roberts Kart Shop Pole Award and heat one earlier in the day. Hall won heat two before driving to victory in the feature. Behind Hall and Glass were Logan Hall, Lanie Thigpen and Barrett Turley. Canon Love, Robert Barthelemy and Parker Stewart rounded out the field.

Ten karts started the Cadet Green final and Adam Wein was dominant on his No. 23 Razor. Wein started pole after winning the heats and raced out to a huge 12.7-second advantage — nearly half the track — by the time Jerry Strickland waved the checkered.

Behind Wein, Will Haire, Justin Sherbert, Hudson Williams and Landon Bass all raced hard in the top five. Williams ran second for several laps before getting passed by Haire and then Sherbert.  Haire would finish second, a couple seconds ahead of Sherbert in third. Williams would settle for fourth and Bass fifth in the 16-lapper. 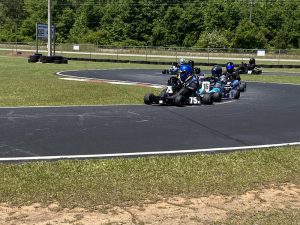 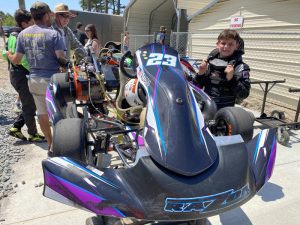 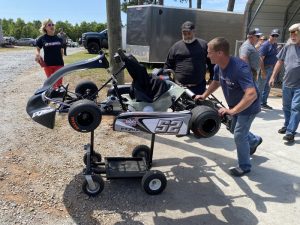 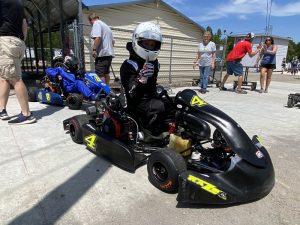 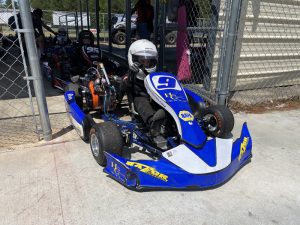 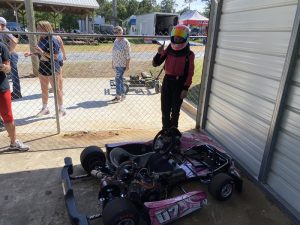 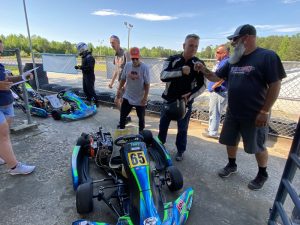 Five cadets started the Cadet Yellow main and again it was Wein out front. Haire was able to hang with him better in this race compared to Cadet Green, but would end up crossing the stripe 4.2 seconds back of the double winner. Thomas Nichols, who won at Jacksonville, had an off weekend at Barnesville and would come home third in this one. Will Franklin and Bass rounded out the five-kart field.

Neither junior final disappointed with some hard racing throughout the fields in both.

Eight drivers started Junior Yellow and K Mike Chidester jumped out to the early lead after winning the second heat. Peyton Bridges moved into second from starting P3 and Emma Kate Scarbrough and Logan Buice both spun in turn one on the start after making contact. They’d get back moving but both were over a half-lap behind.

Bridges hounded Chidester for most of the race, looking high and low at nearly every passing opportunity. With the track so tight it’s very tough to pass, but Bridges was finally able to make it happen with three laps to go. He looked high into turn one several times and was able to make the crossover move off the corner on lap 13. Bridges made contact with the rear bumper of Chidester’s Razor but both kept moving and Bridges had the advantage.

From there the Georgia driver was able to pull his Razor out to about a four kart-length lead over the last couple laps. He’d score the win by 0.778 seconds over Chidester with Brady Atwood third, Alyssa Vascocu fourth and Noah Ryan rounding out the top five.

Junior racers put on another wild show in the Junior Black 16-lap feature. Chidester and Bridges made contact again in this race, sending both around in turn one on the start. They both did “half-spins” and were able to get back moving and would settle in about 10 seconds back of the lead trio of Noah Ryan, Alyssa Vascocu and Brady Atwood, who were able to make it through the opening corners cleanly.

Bridges and Chidester were the fastest karts on the track and began closing in on the leaders by around a half-second per lap. With Ryan leading, just past halfway Vascocu made an inside move into turn 3 to take the lead with Atwood right there in third.

Meanwhile, Bridges was trying to make it past Logan Buice for fourth. After working on Buice for several laps, the pair and Chidester all made contact in turn 3 sending both Bridges and Buice around. Chidester slipped past for fourth, but this ended any chance Bridges and Chidester had to close in on the leaders and make a bid for the win.

Up front, Vascocu, Ryan and Atwood traded positions throughout the last couple laps. Ryan gave Vascocu a tap into turn 3 on the final lap to try to shake her, but she kept her No. 7 pink and white Razor straight to take the win by a close 0.137-second margin. Atwood crossed the stripe right behind in third on his MGM with Chidester fourth and Bridges rounding out the top five.

The Masters final was the last race of the day and came right after Junior Black, which to this point was probably the most exciting final of the afternoon. But the race for the win in Masters rivaled the juniors’ racing with Neil Moore and Brandon Hollenbaugh battling up front.

Moore, who won all four of his heat races on the day between Masters and Senior Heavy, was still looking for a feature win and he put his SLA Kart out front early. But Hollenbaugh, who had rode close to Moore all day, kept his MGM within striking distance throughout the 20-lap contest. With onlookers wondering if Hollenbaugh would have enough to make a move for the lead in the final laps, the pair closed in on Charlie Sabatka to put him a lap down. With three laps to go, Moore moved under Sabatka into turn 1 with Hollenbaugh looking to follow. Sabatka didn’t give the leaders much room, and he, Moore and Hollenbaugh all made contact sending the three karts around.

Hollenbaugh’s situation was the best as he was able to turn his kart around and get back moving. Unfortunately for Moore, who had led all race, his kart was stuck to Sabatka’s and it took awhile for the Maxxis official to separate the two karts. By the time that happened, the race was over for Moore and he pushed his kart off the track.

Luckily for Hollenbaugh, he and Moore had worked up a big enough lead that even with the turn one accident he was able to hold on to the lead and go on to the first national win of his career. Roy Avery came home second and Chris Ball third. Moore was credited with fourth and Tyler Bell fifth in the wild race.

Stevie Roberts, fresh off a win in Friday night’s Money Race, won every round of competition Saturday in Senior Medium, including the 20-lap final.

Roberts, driving his sharp No. 52 Razor, was clearly the driver to beat and he didn’t disappoint. Kenny Buff was the only driver to stay within striking distance of Roberts in the Medium category. Buff, driving a No. 5 MGM, kept Roberts honest in both heats and the final, and he’d end up finishing only a couple kart-lengths back (0.620 seconds) in the main event. Cale Martin was third on his MGM with Joshua Bray fourth and Nicholas Sharpe rounding out the top five.

The Senior Heavy main was another wild race and similar to Masters it involved Neil Moore. After winning both heats and qualifying fastest, Moore moved into the lead on the start but had company up front with Cale Martin and Stevie Roberts, who skipped the heats and joined the field only for the final.

Martin held off Roberts for second for as long as he could until the Razor Chassis owner made it past just before halfway. Roberts went to work on Moore for the lead and Moore’s kart started bicycling pretty hard in turn 3. At one point, the left side of Moore’s kart went so high in the air that he almost went over, but somehow he was able to stay in front of Roberts and Martin, who were looking high and low for a way around Moore.

With five laps to go, Roberts used an outside move at the end of the backstretch to set up Moore through the esses. The two raced side by side through the esses and Roberts was finally able to pull in front with the creative move that he’d been trying for several laps. This left Moore and Martin to battle it out for the runner-up position.

On the final lap, Martin was looking to the inside of Moore in turn 3 when the pair made contact. With the contact Moore, who was having trouble keeping his kart on all four wheels in this corner throughout the race, flipped over as Martin spun around. Martin stopped and helped lift Moore’s kart up, and Moore was OK albeit disappointed after such a strong day early.

Roberts would go on for the win and the Moore / Martin incident would give second to Flip Davis. Noah Rivers was third with Moore and Martin credited with fourth and fifth.

Swann started the day with the win in Stock Heavy. With Johnson in tow, the pair raced away from the rest of the 10-kart field to settle the race amongst themselves. Johnson looked to make a move several times on Swann, but he didn’t have quite enough and the two were about evenly matched.

Swann would score the win — his second of the season in Maxxis competition — with Johnson crossing the stripe only 0.085 seconds back. Chuck Watkins was over 5 seconds back in third with Steve Loftin fourth and Don Feathers fifth.

The roles were reversed in the Vintage Stock Medium main event with Johnson jumping out front of Swann at the start. Billy’s No. 75X was strong in this one as he inched away from Swann throughout the 10-lap race.

Meanwhile, Tyler Swann was making passes as he moved through the top five. He made it into third with one lap to go when Tyson Swann’s kart had problems and he slowed on the backstretch. Tyler would move into second and Eugene Neese into third as Tyson dropped through the field.

Johnson would score the win — his second of the season — with Tyler Swann second, Neese third, Watkins fourth and Josh Loftin rounding out the top five in the 12-kart field.

Vintage Super Stock was the smallest division of the day with only three entrants. Kenny Buff was the class of the field, winning every round of competition including the final. Cameron Plyler gained speed all day and ran a near identical lap time to Buff in the final with both drivers at a 26.0 around the 0.27-mile course. But Buff had enough to hold on, finishing 2.7 seconds in front of Plyler for the win. Kevin Frische rounded out the field in third.

After a great round at Barnesville, next up for Maxxis Sprint is one of the series’ biggest races of the year with a return trip to Charlotte Motor Speedway’s 13-turn, 0.65-mile Kart Track on June 18-20.

Located in the infield inside turns 3 and 4 of the Charlotte speedway, the track has been recently resurfaced and renovated to world class specifications. The three-day event is sure to be a good one, and again we’ll be there to cover all the action. Pre-registration, schedules and more information for Charlotte will be posted very soon.